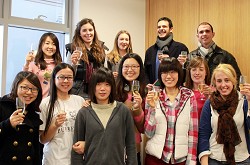 Two students from Harper Adams University College will soon be heading off for a cookery experience at Hugh Fearnley-Whittingstall’s River Cottage after they won the campus version of Come Dine With Me.

Borrowing the popular TV format, Planet Harper Adams, a group that aims to unite students from across the globe, organised the competition, which took place at the end of 2011.

On Friday, all the of competitors reunited for a prize-giving, when the River Cottage experience was awarded to Greek student Anastasios Kyriakopoulos, better known as Tasos, and Frenchman Alexandre Ouvry.

Their menu of smoked salmon swirls, prawn coconut milk curry and banana, kiwi and apple crumble was deemed the overall winner in the contest, which saw pairs of students take turns to host each other for a three-course dinner.

Half of the competitors were students from Beijing Agricultural University, completing the final year of their degrees at Harper Adams. As a result, each BUA pair took on a pair from “elsewhere”, with the UK, France and Greece represented by the remaining competitors.

Runners-up, and receiving a local food hamper each, were Ashling Toolan, from Leicestershire, and Bruce Dalton, from Derbyshire

The competitors were rated on ambience, table setting, presentation of food, flavour and the compatibility of their three courses.

Pam Thompson, from the International Student Support Office at Harper Adams, said: “The students who took part have said that they enjoyed the experience and were glad to have done it. They met people they might not have met otherwise and ate food they might not have cooked or tasted had this competition not taken place. Some pairs have met up again since the competition, which was the aim of the completion, to forge new friendships between home and international students.”