Never sell yourself short – never look at a job, award or scholarship and think ‘I’m not good enough’. Go for it, don’t pass anything up." 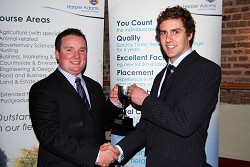 Students, staff and special guests came together on Friday to enjoy the annual Harper Ireland dinner.

The event was organised by the student association of the same name and was held at the stunning Madeley Court Hotel in Telford.

During the evening, the outgoing committee stepped down and the new committee was announced, as well as a three-course meal, awards, and thought provoking talk from guest speaker, Steven Houston.

He is currently managing a 15,000 acre arable farm in Bulgaria and received a Nuffield scholarship in 2006.

He said: “I’m very honoured to be invited to speak at the Harper Ireland dinner. It’s a legendary occasion in the college social calendar.

“It’s great to be back and to see that Harper has expanded both in facilities and new faces.”

To be able to attend the celebration, Steven had travelled from Bulgaria, arriving in time for a tour of new anaerobic digestion plant.

He added: “My advice to you all is to not pass up any opportunities, especially overseas travel.

“Never sell yourself short – never look at a job, award or scholarship and think ‘I’m not good enough’. Go for it, don’t pass anything up.”

Thanks were given by outgoing Chairman and host for the evening, Cormac Flaherty from Kilmessan, County Meath, for the support given to him during his time in office.

They had spent the day touring the campus and learning more about what the University College can offer in terms of land-based qualifications.

19-year-old Cormac, also presented the Chairman’s Cup to incoming Chairman, Niall Morrow and welcomed him to his term in office.

Niall, 18, is from Belfast and is in the first year of a BSc (Hons) Agriculture with Mechanisation degree.

Also announced during the evening was the President’s Award. This was presented by Principal, Dr David Llewellyn, to 21-year-old Phillip Gault from Limavady, County Londonderry. Phillip is studying BSc Honours Agricultural Engineering with Marketing and Management.

A host of scholarships were presented to their recipients and two students, David Boyd and Jonathan Spence, were commended for their success in winning grants to attend the coveted Oxford Farming Conference. 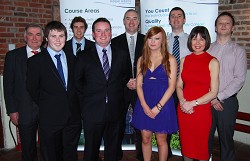