When looking at universities, Welsh students should definitely consider coming to England. 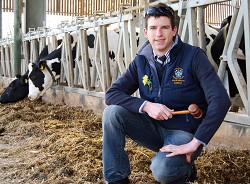 Final year student, Carwyn Rees, is hoping to follow in his late Grandfather’s footsteps by becoming a livestock auctioneer.

The 22-year-old, who is studying Rural Enterprise and Land Management (REALM) at Harper Adams University College, is preparing for a week’s trial at Welshpool Livestock Sales during the Easter break.

Carwyn, a Welsh-speaking farmer’s son from Llandovery, Carmarthenshire, said: “I’ve always wanted to become an auctioneer because it’s linked to agriculture, having been brought up on a dairy farm, and is also something a bit different. I get a buzz from it!

“My Grandfather trained to become an auctioneer before the war after studying at Harper Adams, my Great Grandfather also came to Harper.”

Carwyn spent last summer auctioneering at Ffairfach Market near Llandeilo, working on the end of month poultry sales. He has also entered Young Farmers competitions and represented Harper Adams at a RICS property auctioneering competition in London, where he reached the semi-finals.

Aside from auctioneering, Carwyn plays an active role in social activities at Harper Adams and is keen to promote the University College at events across the country. He was recently presented with the Harper Cymry/Royal Welsh Agricultural Society student award at the annual Harper Cymru dinner.

Carwyn added: “I came for an interview and really enjoyed the atmosphere here. I also liked the fact that it’s campus-based and everyone is friendly and knows each other.

“But, the main selling point for me was student society, Harper Cymru. It brings all of the Welsh students together for social events and provides a support network.

“When looking at universities, Welsh students should definitely consider coming to England. Here at Harper there is a great Welsh community and it’s surprising who you meet from back home.”

Since coming to Harper Adams, Carwyn has joined the Harper 3rd XV rugby team, spent a year as the Harper Forum Chairman, was voted in as Harper Cymru Member of the Year 2010 and is now a student warden for the Gloucester halls of residence.

He spent his placement year working for Edward H Perkins, a firm of Chartered Surveyors in Haverfordwest, and is a student ambassador, helping the University College during open days and at shows and events.

Outside of Harper Adams, he is a member of Llandovery Young Farmers and has been approached by a television company to feature in their farming programme.

The former Ysgol Gyfun Pantycelyn student said: “I’m really glad that the perception of studying away from home didn’t put me off coming here. It’s definitely worth it.”

Post studies, Carwyn hopes to settle into a career as an auctioneer, becoming a member of the Central Association of Agricultural Valuers (CAAV). He is also planning to travel and work in New Zealand.