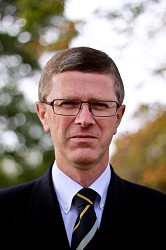 With economic growth of more than five per cent per annum, and a considerable manufacturing base, Turkey is looking to expand its knowledge economy and is investing heavily in research and development.  It has plans to double current levels of investment in research in the next two years.  These ambitious objectives were explained to a delegation of leaders of the UK's higher education system that recently accompanied the Minister for Universities and Science, David Willetts, on a brief visit to Turkey earlier in April.

Harper Adams Principal, David Llewellyn, was one of the delegates.  The aim of the trip was to investigate opportunities for collaboration between Turkish and UK universities in key strategic fields, including food security, energy security and the management of future water supplies.  Harper Adams has recently secured funding from the British Council for an initiative with two Turkish universities to work with the country's poultry sector, and other opportunities were explored in food science and engineering.

The delegation visited Bilkent University, in Ankara, and saw a $60m investment in a new building housing state of the art nanotechnology and materials science facilities, and where the research included novel technologies in food packaging intended to extend the shelf life of food products.  In Istanbul, as well as seeing examples of advanced engineering and student entrepreneurship, there was a chance to discuss ways in which industry might be encouraged to work with universities in Turkey and in the UK and to meet representatives of other universities and the Turkish Government.

Dr Llewellyn said: “Turkey has looked to the USA and other countries over recent years to develop its science base and to train its academics.  If this mission has persuaded Turkish university leaders to work more closely with the UK then it will have been judged a success.  Turkey is the fastest growing economy in the OECD and its infectious enthusiasm for developing its science base and training the next generation of researchers was evident from the warm welcome given to the UK group.”