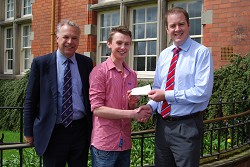 Three Harper Adams students have received £500 worth of prizes for their work on an assignment sponsored by a leading property consultancy.

The scheme was devised by Andrew Black, an associate at Carter Jonas’s Shrewsbury branch, and he presented the prizes to the three students who were asked to work on a real-life case study of their own campus in Newport.

The first prize was won by 20-year-old Lewis Smith from Leicester who was awarded £300.

Mr Black, said: “This year’s assignment included carrying out agriculture and development valuations, a marketing and property appraisal, and producing a set of particulars and a marketing strategy.”

“Carter Jonas is delighted to be involved with students at Harper Adams – it is a breeding ground for specialists in rural and agricultural matters, and we enjoy the close association we have with the University College.

“There were some excellent reports but I felt that Lewis’s stood out as the one which stuck most closely to the brief, and the particulars he produced were excellent.”

Lewis said he was very pleased to have won the award and the work he carried out for it would hold him in good stead for the future.

He added: “I enjoyed the assignment as I'll be able to use the skills I learnt when I go on placement, so it has been extremely good practice.

“It’s also nice that my hard work has been rewarded.”

Second prize of £150 was presented to Will Foyle from North Yorkshire, and third prize of £50 to Robert Simpson from West Yorkshire.

REALM course manager, Simon Keeble, said: "As always, we thank Carter Jonas for their continued support that enables our students to deal with a live case and bring the practical side of surveying to their studies.

“It also recognises their achievements with cash prizes for the top students.”

Placement forms the third year of sandwich degrees at Harper Adams. Examples for REALM and RPM include Savills, Fisher German, The National Trust and Carter Jonas. 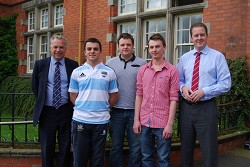