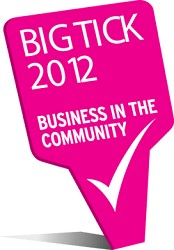 Harper Adams University College was revealed today as a recipient of Business in the Community’s (BITC) coveted National Big Tick for its anaerobic digester project.

The Big Tick award is the first level of award available to entrants to the national Awards for Excellence, which commends the best examples of business as a force for good.

The Harper Adams Anaerobic Digester was one of four entrants from across the UK shortlisted for a chance to be crowned the overall winner in the Dairy Crest Rural Action Award category and a team from the University College presented their entry to a panel of expert judges in May. The final results will be announced at the Awards for Excellence Gala Event on 27 June in London.

Business in the Community’s Awards for Excellence recognise the powerful and positive role that business is playing in local communities by rewarding organisation for the impact and innovation of their responsible business programmes across a number of categories. The awards are given to companies who demonstrate their leadership on the key social and environmental issues where business can make a difference at local, national and international levels.

Harper Adams Principal Dr David Llewellyn said:  “We are delighted to receive this Big Tick and be shortlisted for the overall winner prize in the Dairy Crest Rural Action Award in recognition of the work we have done to ensure that we have a positive impact on society. Harper Adams, through research and education, is continuously working hard to support rural communities.

“Our anaerobic digester generates heat, power and biofertiliser from food and farm waste. As a demonstration facility, it enables farmers and other businesses engaged in the agri-food chain to learn how renewable energy technology can benefit their business. At the same time, this facility is allowing Harper Adams to further reduce its greenhouse gas emissions, and has the potential to offset our carbon emissions more than three times over.”

Harper Adams will be presented with its Big Tick at the West Midlands BITC Awards event on June 12. A full list of Big Tick winners is printed in the Financial Times today (May 30).