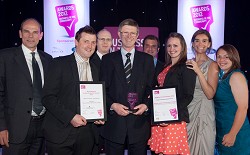 The Business in the Community (BITC) Big Tick is the first level of award available to entrants to the national Awards for Excellence, which commends the best examples of business as a force for good.

Harper Adams was shortlisted in the Dairy Crest Rural Action category – a prize for companies who support rural communities. The overall winner will be announced at the Awards for Excellence Gala Dinner on June 27 in London.

David Darlaston, Regional Director at Business in the Community, said: “Each year I am thoroughly inspired by the amazing examples of what businesses are doing in the West Midlands to incorporate responsible business in all they say and do.

“Our winners show great leadership and willingness to genuinely transform their businesses and the communities in which they operate in by identifying mutual benefits.”

This was an unexpected but welcomed accolade which further recognises the commitment Harper Adams has made to a sustainable future.

Speaking about the anaerobic digester, Principal, Dr David Llewellyn, said: “Our anaerobic digester generates heat, power and biofertiliser from food and farm waste. As a demonstration facility, it enables farmers and other businesses engaged in the agri-food chain to learn how renewable energy technology can benefit their business.

“At the same time, this facility is allowing Harper Adams to further reduce its greenhouse gas emissions, and has the potential to offset our carbon emissions more than three times over.” 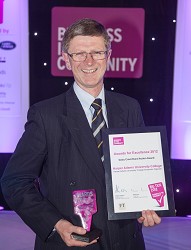