It’s a massive achievement, I didn’t expect it at all. 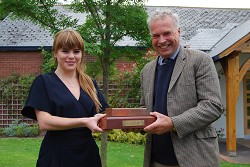 The award for the top construction and surveying student at Harper Adams University College has been presented to Abby McKay-Hipwell.

The ‘REALM brick’ is given to a first year student studying either Rural Enterprise and Land Management (REALM), or Rural Property Management.

Abby won the brick, now in its 19th year, after gaining the top overall mark for the construction and surveying module.

The 19-year-old REALM student from Glendon near Kettering, said: “It’s a massive achievement, I didn’t expect it at all.

“I found the assignments interesting, and particularly enjoyed the one that involved designing a cricket pavilion.”

As well as the cricket pavilion assignment, Abby also worked in a group to survey and project manage the development of a redundant farm building.

Both tasks contributed to her award winning grade, which placed her ahead of 70 other students studying the same module at the University College in Shropshire.

REALM Course Leader, Simon Keeble, said: “Winning the brick is an excellent achievement for Abby and shows that she is capable of achieving great things during her time at Harper Adams.

“It certainly bodes well for her future career.”

Abby, a former Pitsford School student, is about to embark on a month-long trip to China to complete a course at the Beijing Agricultural University.

She is joining five other students from across a variety of years and courses to learn about the Chinese culture.

As well as achieving the brick, Abby is the Course Representative for REALM and a Harper Adams ambassador for the RICS Matrics networking group.