It is rather daunting and an incredible honour to join such an impressive line-up of finalists from not only this year’s competition, but from previous years. 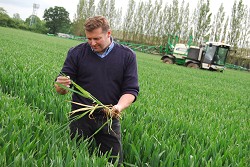 Harper Adams Farm Manager, Scott Kirby, has been shortlisted for a Farmers Weekly award in recognition of his work to combine a commercial farm enterprise with education.

Scott, who took on his role at the University College 12 years ago, has been nominated in the ‘Farm Manager of the Year’ category, alongside two other finalists.

He said: “It is rather daunting and an incredible honour to join such an impressive line-up of finalists from not only this year’s competition, but from previous years.

“I’m slightly nervous but I know that the sheer breadth and quality of what we do at Harper Adams never fails to surprise and impress visitors.”

Scott was born and raised in North Yorkshire, and despite not being from a farming family, started milking and driving tractors on a local farm aged 13.

He completed a degree in Agriculture at Newcastle University and became its dairy herd manager, before moving to become a farm business consultant across Scotland.

It was after this that he relocated to Shropshire to work for Harper Adams, taking charge of the 500 hectare farm, running beef, dairy, arable and sheep systems.  He leads around 13 members of staff and is heavily involved in the University College’s farm environment schemes and sustainability agenda, including the anaerobic digester.

Scott, who recently completed a Nuffield Farming scholarship entitled ‘Green opportunities for agriculture’, added: “My vision for the Harper Adams farm has always been to operate a credible commercial business that is constantly scanning the horizon for innovative new ideas, and opportunities to support and inspire teaching and research.”

The Farmers Weekly Awards showcase the best farmers in the country by telling their stories. They aim to spread best practice, inspire others and influence the public about the role that farmers play in today’s society.

The Awards are in their eighth year and are sponsored by some of the biggest names in the industry. This year, they take place in London on October 4. 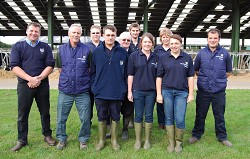 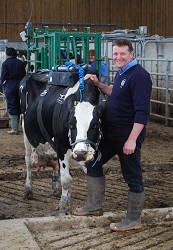