Alumnus speaks of his dinner with the Queen 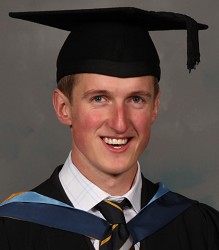 A Harper Adams University College alumnus was given pride of place at The Queen’s Diamond Jubilee Lunch, seated just feet away from Her Majesty.

Michael Lawrence, a dairy farmer from Cumbria and a member of Kent Estuary YFC was nominated to attend the dinner by The Worshipful Company of Farmers, one of 108 Livery companies based in the City of London.

As a student at Harper Adams, Michael was awarded a scholarship by The Worshipful Company of Farmers after impressing them with his hard working attitude and dedication. He also remained in contact with them, thanking them for their support and informing them of his progress.

Richard Brooks, a past master of the Worshipful Company of Farmers said: “Michael Lawrence is a credit to himself. The Worshipful Company of Farmers gives prizes each year at 10 or 11 colleges and seldom do we receive even a letter of thanks – yet Michael sent us a report of how he was getting on at home after university and his plans for the future of the family farm.”

Michael adds: “I had a phone call from Richard in February and he explained that I had been nominated. I couldn’t believe that they even remembered me. I can’t describe how I felt when I opened the invite, over the moon I think. My dad kept reminding me every day how lucky I am and mum was bouncing off the ceiling!”

The lunch, which was given by the Livery companies of trades and professions ranging from agriculture to banking, was attended by around 700 people including representatives of charities and the armed forces as well as senior members of the royal family.

Michael, who was visiting London for only the second time, was to be seated with the Duke of Edinburgh, but unfortunately he was too ill to attend the lunch;

“It was such a shame he couldn’t make it, I know he is keen on farming and the outdoors so I think that we could have had a good chat.”

However, Michael’s fellow diners were just as keen to hear about his farming background. They included the Speaker of the House of Lords, Baroness De’Souza and Lieutenant-General Arundell David Leakey, Gentleman Usher of the Black Rod.

“Everyone else on the table seemed to be interested in farming, although they might have just been being polite! Baroness De’Souza and I were chatting about the dairy industry and she seemed to know a lot about it which was a nice surprise,” said Michael.

“We got to our seats and sat down and then the Royal Family all came in. I reckon I was about 10ft from the Queen.

The atmosphere was a bit tense to begin with because everyone was really nervous, but after about ten minutes everyone began to relax. Then you would just look around and realise that the Queen was right there, it was a bit surreal!”

As well as attending the lunch, Michael was also filmed for the BBC coverage of the event. However his new found fame hasn’t gone to his head and Michael is now gearing up for a summer of YFC competitions.

“Young Farmers is a big part of my life. I take part in competitions and enjoy the social side of it too. I do a lot of stock judging with my two brothers and sports as well. We had our field day a couple of weeks ago, and we’re getting ready for the Northern Area competitions now.”

Despite returning to normality, Michael says he feels incredibly privileged to be part of these unique celebrations.

“The last time they held one of these dinners was in Queens Victoria’s reign, so I don’t think that it is something that will happen again in my lifetime. But it was a real honour to attend, and a day that I will never forget,” he said.