“It is great to be recognised at a national level amongst such prestige, and in the company of Prince Charles. 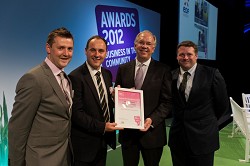 The Harper Adams Anaerobic Digestion Plant has been Highly Commended at a national award ceremony that showcases the best of responsible business in action.

Business in the Community (BITC)’s Awards for Excellence were held this year at Old Billingsgate Market, London, in the company of HRH The Prince of Wales.

Harper Adams was shortlisted for the Dairy Crest Rural Action Award and was presented with the Highly Commended accolade by Mark Allen, Chief Executive of Dairy Crest.

Estates Manager, Paul Moran, said: “It is great to be recognised at a national level amongst such prestige, and in the company of Prince Charles.

“It demonstrates how AD has a benefit in terms of waste reduction, resource efficiency, carbon reduction and in creating rural jobs in the emerging green economy.

“The project has built on a track record of sustainable development on campus and we believe this award will raise the profile to continue our work in the field.”

The Awards for Excellence recognise the powerful and positive role that business plays in the society. They shine a spotlight on those organisations that are transforming themselves by integrating responsible business across all they do.

His Royal Highness, President of BITC, said: “I know that the judges of this year’s awards were particularly impressed by the continued commitment of so many businesses to this agenda despite the obvious temptation to pull back and retrench while we wait for the economic uncertainty that surrounds every company, to subside.

“I do want to offer my warmest congratulations to all of the awards winners this year and to thank them for the commitment they have demonstrated to their employees and the wider community in what has been another difficult year.”