James honoured as one of country's best young catering stars

"... to win fills me with pride and has been a massive boost of confidence, both personally and for my career. I want to thank Harper Adams for supporting me to this level, and the Acorn Awards for choosing me as a winner." James Chapman, Acorn Award winner 2012. 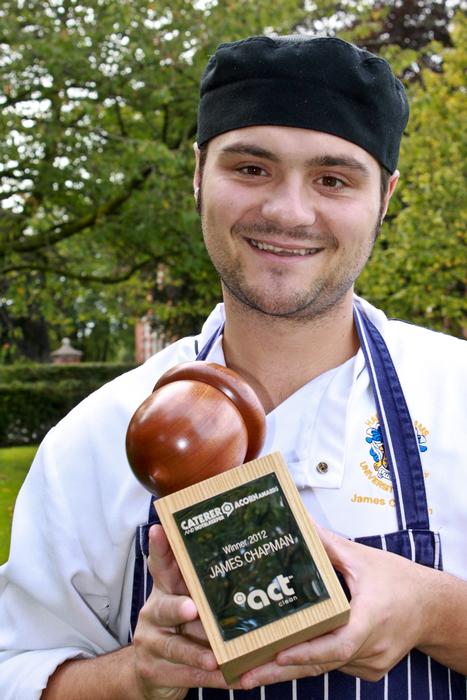 Harper Adams University College's James Chapman has been honoured as one of the UK's 30 best up-and-coming young chefs.

The awards have a prestigious 26-year history and past winners have included Gary Rhodes, Marcus Wareing and Jason Atherton.

The 30 winners in 2012, all aged under 30, represented every sector of the hospitality industry. As reported in Caterer and Hotelkeeper magazine, which organised the awards: "Their job titles may have differed, but they were all united by the fact that they had been recognised as being outstanding performers in their chosen area of the industry, with energy, dedication and innovation in abundance."

James, from Newport, said: "I was delighted, first of all, to be nominated for this award by my manager, David Nuttall, but to win fills me with pride and has been a massive boost of confidence, both personally and for my career. I want to thank Harper Adams for supporting me to this level, and the Acorn Awards for choosing me as a winner."

James told the magazine that the proudest moments in his career had been Harper Adams being shortlisted for a Sustainable Business Catey (the catering industry's Oscars) in 2009, then going back and winning the award in 2012; and that his greatest inspiration came from chefs such as Gary Rhodes and Raymond Blanc "because their farm-to-fork approach has made me strive for high standards in my own career".

James joined the kitchens at Harper Adams University College in 2004 as a commis chef and has worked his way up to second chef. He supervises up to 20 staff. James has embraced the changing culture of university catering and supported the implementation of calorie counts and nutritional analysis on menus. He has been key to driving the sustainable agenda at Harper Adams, with few fresh ingredients travelling more than 20 miles and waste food being diverted to the on-site anaerobic digester, helping to reduce C02 emissions by 14,000 tonnes a year.

David Nuttall, Catering Manager at Harper Adams, said: "It’s fantastic that James has been recognised for his achievements and this award is thoroughly deserved. My thanks go to the Caterer & Hotelkeeper magazine for involving the University College sector in these prestigious industry awards. This highlights the success in our field-to-fork approach and how we invest in our young team members to raise the standards we offer."