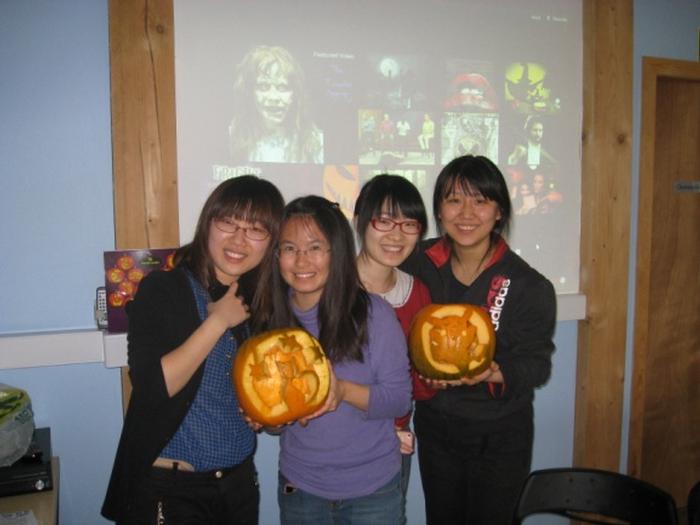 Pumpkins inscribed with ghoulish faces and illuminated by candles are a certain sign of the Halloween season. International students at Harper Adams have been getting into the spirit by carving pumpkins as part of a Planet Harper group event.

Every Wednesday afternoon, the Planet Harper group, organised by staff including International Officer Pam Thompson and Course Manager Sandra Turner, is held at the University College in Shropshire, where students of all nationalities, including British, can meet up, socialise and learn about each other’s cultures. This week a group of 50 students from Beijing and Greece had fun carving pumpkins.

Sandra Turner said “The students were keen to learn about the practice of decorating ‘jack-o’-lanterns’ - the name of which comes from an Irish folktale about a man named Stingy Jack.  Irish immigrants took the tradition to America, home of the pumpkin, and it became an integral part of Halloween festivities. There were some interesting carvings and the students’ jack-o-lanterns were both striking and menacing!”

Student Shuanghui Du said the pumpkin carving session was “excellent and good fun”.  The students commented that they don’t really do these kinds of activities in their home countries, but they are very interested in learning about different cultures while studying here.

Pam Thompson, International Officer, said: “Planet Harper helps students to socialise and along with our weekend trips to Liverpool, Chester and Oxford this term, there will also be a number of enjoyable sessions on campus, including making a Guy for the Harper Adams Bonfire, a Chinese cooking demonstration and Christmas cake decorating (which gets shared at the Christmas party where students can sample mince pies and mulled wine). Some weeks, the activities are off campus and include visiting local historic buildings, scenic walks and craft activities.”