It’s a bit of fun and has been very well supported. 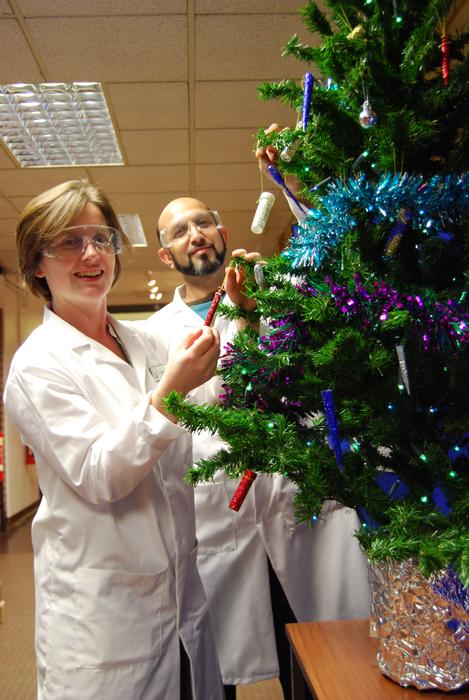 Scientists at Harper Adams University have gone Christmas crackers by decorating their labora-tree with glittery pipettes, syringes and microfuge tubes.

Staff and students have been donating money to charity in exchange for placing a specially decorated ‘bauble’ on the Christmas tree in the teaching and research laboratories in the campus’ Princess Margaret Laboratories.

All money raised will be donated to Shine, Europe's largest organisation dedicated to supporting individuals and families as they face the challenges arising from Spina bifida and Hydrocephalus.

The idea was the brainchild of Dr Victoria Talbot, Laboratory Manager. She said Shine was selected as the chosen charity after a former colleague in Domestic Services, which is also raising money for Shine, tragically lost her daughter to Hydrocephalus earlier this year.

Dr Talbot added: “Lots of different departments have done charity fundraising and we had been wanting to do something for a while.

“We thought Shine was a good charity to support and we thought the labora-tree was a really nice pun.

“We thought we would make laboratory related Christmas decorations to put our own twist on it and we thought glittery lab plastics would be a good idea because laboratory plastics are disposable items. It’s a bit of fun and has been very well supported.”

The amount raised will be added to money collected by other departments at the university which have also been raising funds for Shine.