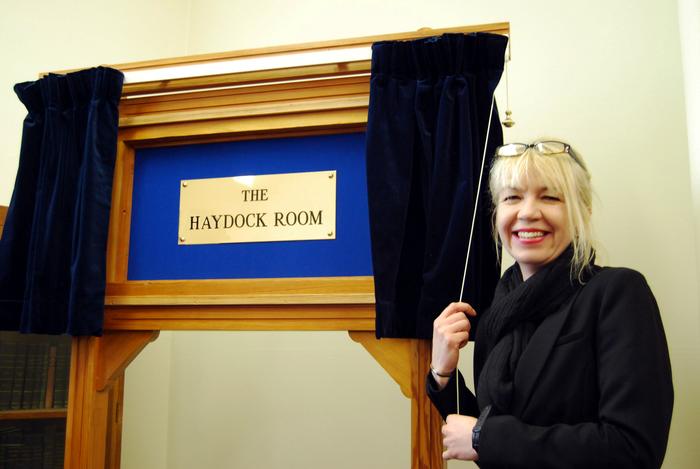 Friends and family of the late Dr Pat Haydock came together recently to celebrate his life and officially name a room in his memory.

Pat’s death saddened colleagues last year, who since thought it fitting to mark his contribution to nematode research and the wider community at Harper Adams in a permanent way.

The Committee Room, many years ago the university library, is located in the main building and is regularly used for both internal and external meetings. It has now been named the Haydock Room.

Members of Pat’s family, including wife Biddy and daughter Becky, officially opened the Haydock Room last week, where colleagues and friends were invited to share memories over lunch.

Vice-Chancellor, Dr David Llewellyn, opened the ceremony with a few words about Pat’s contribution to Harper Adams. He said: “Pat was an outstanding lecturer and researcher, and made a real difference to the industry through his work on developing our understanding of potato cyst nematodes.

“I am sure that Pat would have liked to have known that the work of his group is continuing, and was just recently featured in Potato Review – maintaining the close connection he had sought, over many years, between research and farming practice.”

Pat took up a lecturing role at Harper Adams in 1990 and established a leading international reputation for nematode research and was a much sought after expert in his field.

He published widely, supervised many post graduate students and was successful in securing research funding from a wide range of sources.

Pat made seminal contributions to our understanding of potato cyst nematodes (PCN) and was responsible for establishing a centre of excellence in this area at Harper. This was recognised by his promotion to the position of Reader in Nematology.

Pat was also an active member of several scientific societies and in particular made significant contributions to the Association of Applied Biologists Plant Nematology sub-group.

He initiated and organised an international symposium series on PCN management, which were held at Harper Adams in 2000, 2005 and 2010.