They were impressed with JCB, which is a pioneering, world renowned company, and Harper Adams, which, among other impressive credentials, is the leading educator of the next generation of farmers. 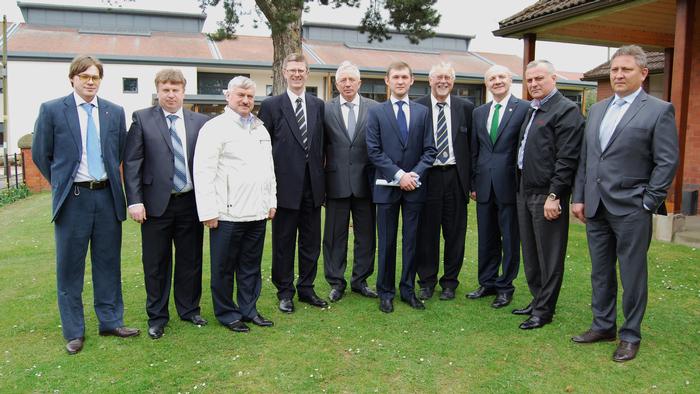 A group of Russian politicians has visited Harper Adams University as part of a whistle-stop tour of the region to strengthen farming ties and agricultural trade links.

The delegation, including farmer Aleksandr Kasatskii, Vice-Governor of the Bryansk region, toured JCB headquarters in Rocester, Staffordshire, before heading to Harper Adams for talks with the university’s Vice-Chancellor, Dr David Llewellyn, and industry demonstrations. The visit, which took place last Thursday, culminated in a tour of a farm between Telford and Shrewsbury.

Mr Quinney said Bryansk was developing ranch-style cattle farming and was looking to source 250,000 animals to add to its stock.

Their farmers were importing cattle from America and Australia but a few months after the trade mission Russia agreed to lift its ban on importing British beef and lamb.

The 16-year restriction was in place following the 1996 BSE outbreak in the UK and remained in place in Russia, despite the worldwide ban being lifted in 2006.

John Mercer, NFU Regional Director, who met the Russian politicians during their trip, said: “When the export ban was lifted it was established it could be worth around £80 million to £115 million to the British livestock industry over the next three years.

“British produce is in demand on both home and export markets and Russia is one of the largest global importers of beef so the potential demand is huge.

“We were delighted to be involved in last year’s trade mission and it was a pleasure to welcome the Vice-Governor and other delegates to the region on the back of that.

“We had progressive discussions with them and showed them some of the best the industry has to offer in Shropshire and Staffordshire.

“They were impressed with JCB, which is a pioneering, world renowned company, and Harper Adams, which, among other impressive credentials, is the leading educator of the next generation of farmers.”