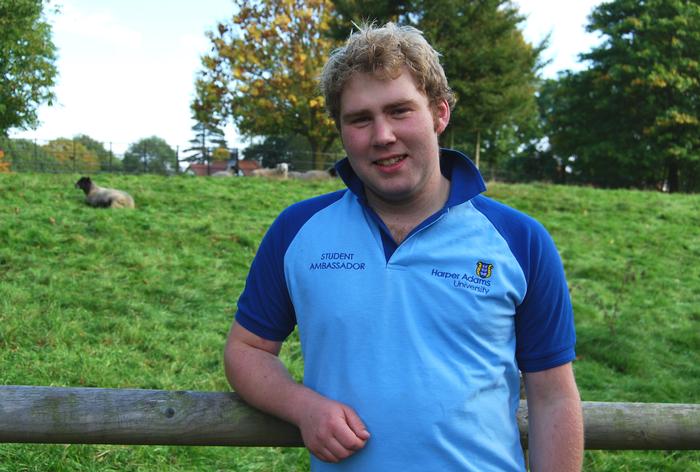 It gives me great pleasure to be writing about what I will be getting up to as a student and also as an ambassador - getting stuck into everything at Harper Adams over the next year.

Student ambassadors are employed by the university to undertake campus tours and speak to prospective students and their parents at open days and interview afternoons. It is a great responsibility as the ambassador may be the first and lasting impression a prospective student may have.

Students must apply for this role and receive formal training so that they are prepared to meet the public and share the work of Harper Adams. Not only is it a privilege to be an ambassador, but it is also a great way for students to earn some extra cash during term time - something which as a student is hard to come by!

So, over the summer I attended two events as an ambassador, the first being the Higher Education Choices (HEC) Conference. At HEC, 16-17-year-old students attend a two-day taster weekend, giving them their first experience of Harper Adams.

They attend seminars in their chosen subject area, as well as have a great time, meet other prospective students from across the country, and take part in activities and team-building games. It really is a must for anyone considering studying at Harper Adams; I definitely regret not doing it now!

The second event I helped with during the summer as an ambassador was the Royal Welsh Show in Builth Wells. As a young farmer from Pembrokeshire, the Royal Welsh is certainly one of the highlights of my year.

The marketing team from Harper Adams has a stand at the show, with staff from the department as well as lecturers, the Vice-Chancellor, and two student ambassadors, working as front of house. Many youngsters attend the event and it is essential that Harper Adams has a presence, to encourage future students to come and have a chat and ask any questions that they may have.

Once again September was upon us and the pilgrimage back to Harper Adams began! A few of us students came back two weeks early alongside the Students’ Union committee to take on the role of Freshers’ Crew. This assists with the arrival of the freshers’ on registration day, as well as organising the freshers’ week activities and preparing the SU bar ready for the ball.

This was a great experience, as we wanted to make the week as good as possible to ensure that the freshers’ had a really great time.

Before term began, one of the biggest open days of the year was held. I helped with the campus tours in my role as an ambassador, showing prospective students around the university - from academic areas such as the library, to student life and accommodation and catering.

Thank you for reading my first blog of the year, I hope you enjoyed it and it gave you an insight into life at Harper Adams. Look out for the next issue! www.twitter.com/AlexCrunchie