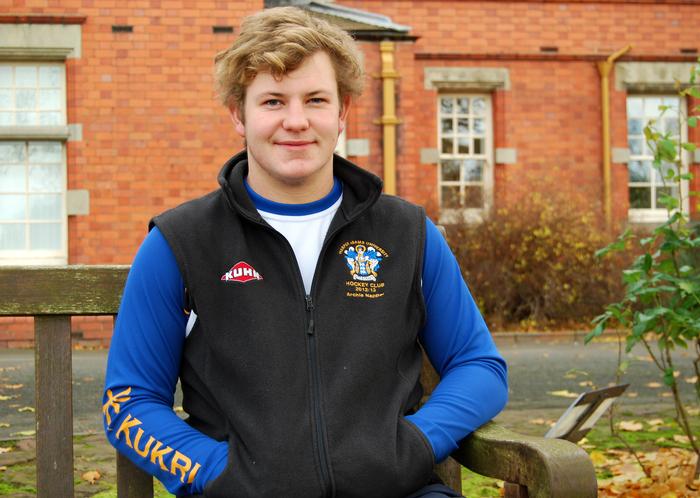 Second year Harper Adams student, Archie Napper, is hoping to use his love of sport and keenness to win to his advantage – by striving to improve the university hockey team.

Archie, from Didcot in Oxfordshire, has played hockey since he was 14-years-old and is the current men's 1st team captain at Harper Adams in Shropshire.

Standards are fast increasing with places on the team limited and competitive league games. The team is currently sponsored by agricultural machinery manufacturer, Kuhn.

The 19-year-old BSc (Hons) Agriculture student, said: “I love sport and hockey is fast-paced with constant exercise and the need to think about the game all the time.

“It’s great to be a part of because you get to make new friends and mix with a different crowd to those involved in the more classic Harper Adams sports such as rugby and football.

“The team here is really improving and growing in popularity. Thanks to a great standard of freshers’, it’s now extremely hard to get a place on the hockey team, which shows that people are taking it seriously.

“I also really enjoy the matches and getting to meet students from other universities through the BUCS (British Universities and Colleges Sport) league. There’s a great sense of camaraderie, especially this year with some great opposition teams from Bedfordshire and Oxford Brookes.”

Despite a love of team sports, rugby and football just haven’t been of interest to Archie, preferring to opt for hockey in the winter and cricket in the summer.

Archie, who plays cricket for East & West Hendred Cricket Club, added: “I’ve played cricket since I was a child and love it! You just can’t beat Saturday afternoons in the sunshine having a match with friends.

“When I’m playing cricket, I can play and not worry about anything else, usually getting away from the farm. I would love to set up a cricket club at Harper Adams and form a team.

“I’m hoping to attract some interest and get some games with other universities.”

When away from Harper Adams, Archie helps to run the family farm – a mixed enterprise of sheep, cattle and arable.

The family also has a farm shop and produce their own ice cream, of which Archie helps to make alongside his mum.

He added: “I love farming and helping out at home. I chose Harper Adams because I know people that have been here and have always sung its praises. I’ve not been disappointed.

“In the future, I hope to travel for a year and then return to manage the family shop.”