"It seemed only fitting, that, on marking the occasion of the installation of the University’s first Chancellor, HRH The Princess Royal, Harper Adams should celebrate not only its historic links with the County and the Council, but also the creation of Shropshire’s first University.” 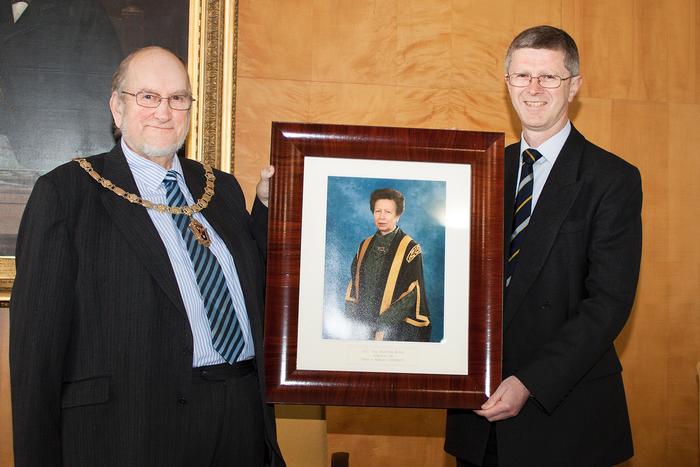 The gift marks not only the installation of the Princess Royal as the ceremonial figurehead of the county’s first university, but also celebrates the council’s role in supporting agricultural education in Shropshire for more than a century.

The presentation took place at the start of this morning’s full council meeting. Harper Adams Vice-Chancellor Dr David Llewellyn told councillors: “The link between the Council, the Chamber of Agriculture and the College, goes back to the point when agricultural education was beginning to focus on the application of science to farming practice.

“A group of enlightened individuals took the initiative to create a new institution to support this approach. It seemed only fitting, that, on marking the occasion of the installation of the University’s first Chancellor, HRH The Princess Royal, Harper Adams should celebrate not only its historic links with the County and the Council, but also the creation of Shropshire’s first University.”

In The Lure of Land, a book published for the centenary of Harper Adams in 2001, it is reported that in the late 1800s there was considerable debate about how agricultural education could be extended and strengthened. The 1888 Local Government Act had established a publicly elected local authority for every county and, in the case of Shropshire, the connection was soon established between the Council and the Shropshire Chamber of Agriculture, which had been founded in 1866 and was one of the largest in the country.

In early November 1890, the newly-created Technical and Agricultural Education Sub-Committee of Shropshire County Council concluded that central Government funding should be used to employ two inspectors to ascertain the agricultural needs of the county.

Dr Llewellyn added: “Harper Adams Agricultural College was founded with a bequest from Thomas Harper Adams, and opened its doors in 1901. The rest is, of course, history, but one of the most significant events in the life of the institution was when it became a University in December 2012.

“Although much of our work, nowadays, is at national level we are extremely proud of our role within the county and very much regard ourselves as being a Shropshire institution.”