“The skills displayed by UK team captain Spike Milton and his colleagues were tremendous. It’s a great feeling to have been selected as a rookie and know that they think I show promise." 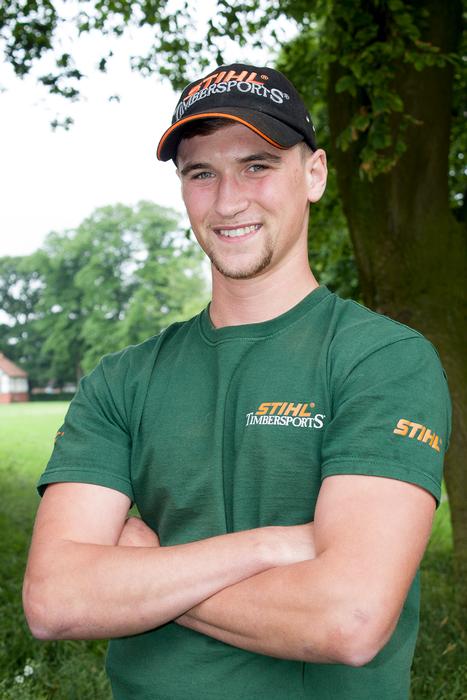 Harper Adams University student Tom Bennett has been selected for the STIHL TIMBERSPORTS® UK rookie team after demonstrating his skills with saws and axes.

Tom, 20, from Ivybridge, Devon, took part in a STIHL TIMBERSPORTS® training weekend on the university campus in March. Potential lumberjack athletes from throughout the UK were invited to the event, during which they tried their hand at three disciplines: the single buck saw, stock saw and underhand chop.

Tom explained: “I already had various chainsaw related qualifications gained alongside my studies at Harper Adams. The idea of TIMBERSPORTS® intrigued me so I signed up and had a go – and I loved it!”

“The skills displayed by UK team captain Spike Milton and his colleagues were tremendous. It’s a great feeling to have been selected as a rookie and know that they think I show promise. Now I have to complete more training. I’ve only tried my hand at three of the six disciplines and will need more practice before the rookie competitions begin.”

Tom and his fellow rookies have been invited to attend the STIHL TIMBERSPORTS® British Championships at the CLA Game Fair in July.

The STIHL TIMBERSPORTS® Series started more than 25 years ago, and Britain has been represented at numerous international events. The six disciplines that make up STIHL TIMBERSPORTS® are the Underhand Chop, Standing Block Chop, Stock Saw, Single Buck, Springboard and the Hot Saw.

Technically as well as physically demanding, each event tests athletes’ handling of an axe and saw and their skill with the timber. The events are a thrill to watch, with competitors racing to cut through great hunks of timber and wielding razor sharp axes with centimetre-tight accuracy and skill.

Working with saws and timber is not new to Tom, a second year Countryside and Environmental Management student, who previously attended Ivybridge Community College. From July, he will be completing a one-year paid placement with the Harper Adams University Grounds Team, as part of his course.

“I’m really looking forward to my placement. I was introduced to the grounds manager thanks to the STIHL taster, and learned more about the work opportunity. They are a great team and there’s so much to experience throughout the Harper Adams estate, it should be a great year,” added Tom.