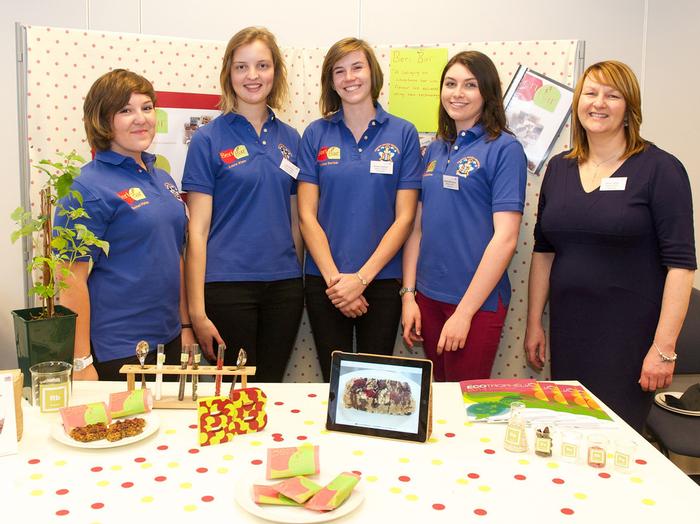 The Gastronommies team from Harper Adams University has been awarded the gold prize at Ecotrophelia UK 2014 for their Beri Bar – an oat cereal bar with mini bursting raspberry spheres topped with a dark chocolate drizzle.

Along with a £2,000 cash prize, the team will be invited to become IFST Young Ambassadors, and receive a one-year IFST membership and a number of Elsevier food science publications.

The UK heat of this Europe-wide competition was organised by UK food and drink research organisation, Campden BRI, in conjunction with the Institute of Food Science & Technology (IFST), the independent qualifying body for food professionals in Europe. The competition challenges young people pursuing a career in the food industry to design an eco-friendly, innovative food or beverage product with commercial potential.

Emma Garlick, a member of the Harper Adams team, who is studying Food, Nutrition and Wellbeing said: “We are delighted to have won Ecotrophelia. All our hard work has paid off. We are now looking forward to the European finals in October.”

Emma was also on the Harper Adams team “More than Meat Pies” that won gold in the UK and reached the European final in 2013 – the first time the UK was represented in the competition.

She added: “We developed the Beri Bar using a molecular gastronomy approach – combining food and chemistry to something modern and exciting that hasn’t been seen before. We wanted to take the cereal bar and make it more exciting and fresh.”

The team’s win was announced at Campden BRI’s annual open day for the food and drink industry at its headquarters in Chipping Campden, Gloucestershire.

After listening to pitches from the five teams in the final and tasting the products, “the dragons” – a panel of top food industry experts – carefully considered each entry for its industrial feasibility, taste, eco-innovation, originality, creativity and innovation, and market credibility.

Prof Margaret Patterson, IFST President and Ecotrophelia judge said: “Once again, the judges were all impressed by the excellent standard of the entries. It was clear that a great deal of creativity and hard work went into each project. These young food scientists and technologists will be a real asset to the future of our profession.”

The Harper Adams team will go on to compete against the gold-winning national teams from across the whole of Europe for the chance to win up to €8,000 in the Ecotrophelia Europe competition, which will be held in October at the SIAL food exhibition in Paris.