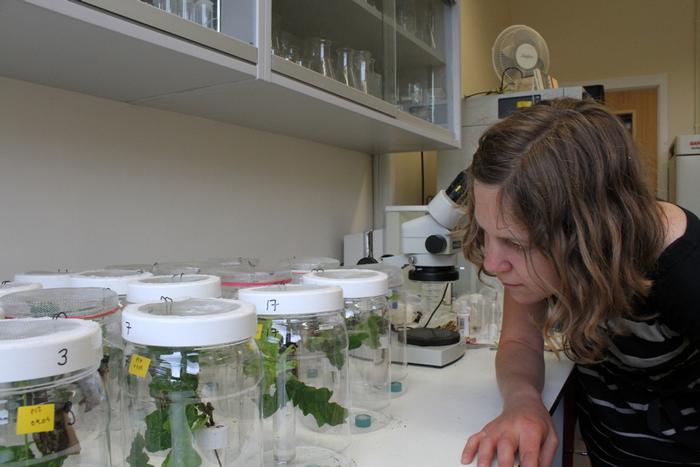 For my PhD project, I am looking at the role of the jewel beetle Agrilus biguttatus, common name: the two spotted oak buprestid, (TSOB), in Acute Oak Decline (AOD).

Only recently recognised in England, AOD is a worrying disorder that damages and may kill English oak trees. The main symptoms of AOD are vertical bark cracks that exude dark fluid. When the outer bark is removed, dying and decayed inner bark tissues are found.

AOD is a syndrome, rather than a disease, which means that it is the result of multiple causes, probably including bacteria and environmental stress. I am studying TSOB because evidence of the beetle is also common on trees with AOD.

TSOB is a beautiful, iridescent blue-green beetle with small white spots on its wing-cases. The beetle is very hard to study in its natural habitat because most stages of its lifecycle are hidden.

The larvae feed in the inner bark of oak trees, probably for one or two years, damaging the tissues that carry water and nutrients in the tree. After pupating in the outer bark, the adults chew their way out through D-shaped exit holes and move up to the canopy, where they feed on oak leaves.

Although TSOB was formerly thought to be very rare in England, and was placed on the Red Data list, the beetle now seems fairly common.

I hope to answer several questions about TSOB and its role in AOD during my PhD. Some questions are, what is its distribution, and is it restricted to certain parts of England, or could it spread to further areas in the UK? How will its lifecycle and distribution be affected by climate change, and what are the implications of these effects for native oaks? At what point does an oak tree become susceptible to attack by TSOB?

I am currently culturing TSOB in the laboratory in order to study it under controlled conditions, and to determine the role of temperature in its lifecycle. I am working with several hundred beetles that emerged from cut bark in a large emergence cage.

Housed in cages, the beetles are feeding, mating, and laying eggs. I hope the larvae will feed on oak logs and develop into adults. By keeping the larvae at several constant temperatures in incubators, I hope to model their development, and ultimately to predict the length of TSOB’s development time in trees, and the area of the UK suitable to its development.