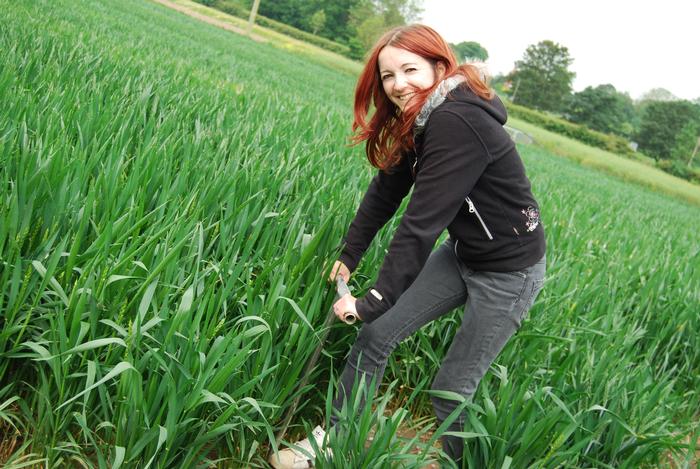 For my PhD, I am studying the biology of an insect called saddle gall midge, Haplodiplosis marginata, that has mysteriously reappeared as a problem pest in the UK.

Until a few years ago, severe outbreaks of this cereal pest had not been seen since the 1970’s when heavy infestations occurred in central and eastern counties.

Saddle gall midge is, as the name suggests, a gall-forming midge that attacks cereal crops. It particularly likes wheat and barley where it can cause losses of up to 70% of the crop.

It is not actually the midge that forms the galls, but the larvae, which burrow into the stem to feed. In doing so, they create small bumps that are raised at either end – like the shape of a saddle. It is these galls that are the problem for farmers as they can weaken the stem of the plant, causing it to break. They can also prevent the ear of the cereal from forming properly by restricting nutrient flow up the stem.

Once the larvae have eaten enough and are fully grown, they leave the galls and drop to the soil. They have a small adaptation, unique to this insect family, in the form of a tiny ‘spatula-like’ appendage on their underside that allows them to burrow into the soil.

It is this stage of the life-cycle in which I am particularly interested as it can be easily monitored. To do this, I have been taking soil samples from infested sites and extracting the larvae by washing the soil through sieves until only small particles remain.

The larvae, which fortunately are bright orange, can then be picked out and counted to give an estimate of the total population. As part of my research, I want to find out how these populations are affected by environmental conditions and if they are predated or parasitised by other species.

With these and other questions answered, I hope to gain a better understanding of this insect which may give us some clues as to its recent resurgence. Ultimately this research will be used to help predict future outbreaks and contribute towards an effective means of control for this sporadic crop pest.