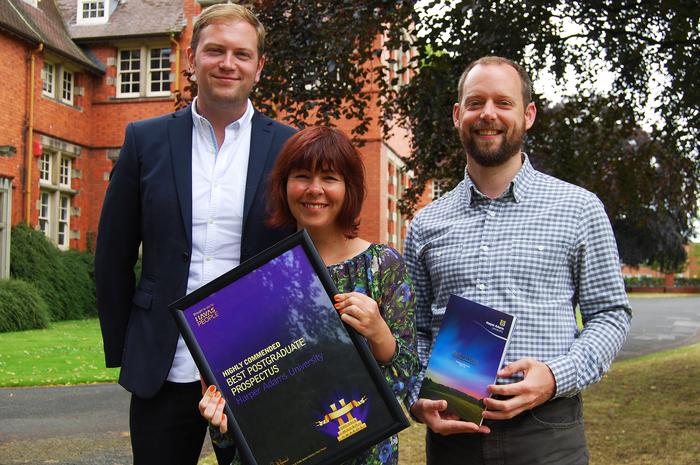 A publication produced by Harper Adams University was ‘highly commended’ at an awards ceremony that celebrates excellent practice in higher education marketing.

The 2013/14 postgraduate prospectus, primarily produced by the Harper Adams publications team, was praised in the Best Postgraduate Prospectus category of the HEIST Awards.

The university was also shortlisted in the Strategic and Corporate Campaign; and Marketing Team of the Year categories of the awards, which were presented at the Palace Hotel in Manchester last week.

Publications Officer Claire Robertson-Bennett, wrote, edited and managed the project, working alongside James Armstrong who oversaw the project and design, as well as providing many of the photographs alongside colleague, James Smith.

Mrs Robertson-Bennett said: “It was a pleasure to work on this project with the great creative team we have at Harper Adams.

“For our work to be recognised by industry specialists at Heist is very encouraging.”

The team worked with Birmingham-based creative agency Z3 and Scene Photography of Nottingham to produce the prospectus.

Director of Marketing and Communications, Lorraine Westwood, said: “As a university we take a strategic approach to our publications, ensuring that each meets the needs of its users.

“For our postgraduate prospectus we used a very innovative structure which was completely user focused.

“We are really pleased to see a different style of prospectus receive national recognition.”