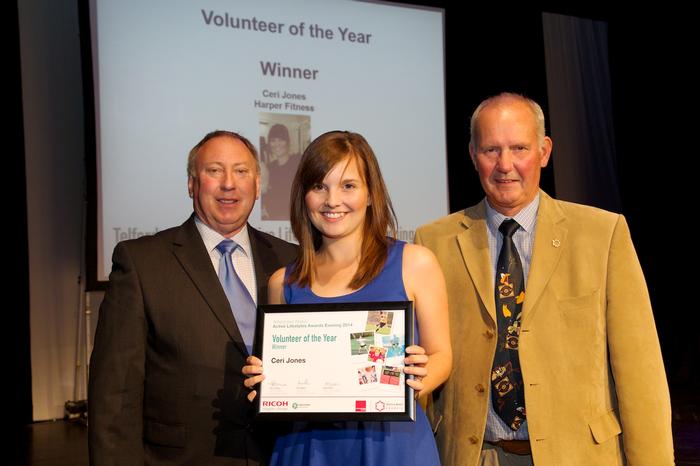 A first year food student from Harper Adams University has been named Volunteer of the Year at an award ceremony that recognises achievements in sport and physical activity.

20-year-old Ceri Jones from Oswestry was presented with the accolade at the 2014 Telford and Wrekin Active Lifestyles Awards, held at the Oakengates Theatre last week.

Ceri, who studies Food, Nutrition and Wellbeing at the university in Shropshire, is a member of Harper Fitness – a group of volunteers that help to run the Students’ Union gym facilities.

Her work includes conducting member inductions, ensuring correct equipment use and promoting the benefits of living a healthy lifestyle.

She is also a member of Lawley Running Club and has completed a number of runs and marathons to raise money for Beat – a charity that provides helplines, online support and a network of UK-wide self-help groups to help adults and young people in the UK overcome their eating disorders.

Former Llanfyllin High School student, Ceri, said: “I am incredibly privileged to have won this award and throughout the year I have received support from everyone around me, with special thanks to Harper Adams University and Lawley Running Club.

“I am ever so grateful and have no plans to stop volunteering within the community and helping those around me. Hard work really does pay off!”

Harper Fitness was also named runner-up in the Active Lifestyles Award category and the university’s rugby team was named Senior Team of the Year runner-up.

He said: “This is a fantastic recognition of the hard work Ceri has put in, with her work both for Harper Fitness and Beat.

“Her passion and enthusiasm for health and well-being is incredible, and really shows that students are rewarded for their efforts.”

The awards, which honour individuals, teams, groups and business achievements in sport and physical activity, are sponsored by RICOH and Telford and Wrekin Sports Forum.