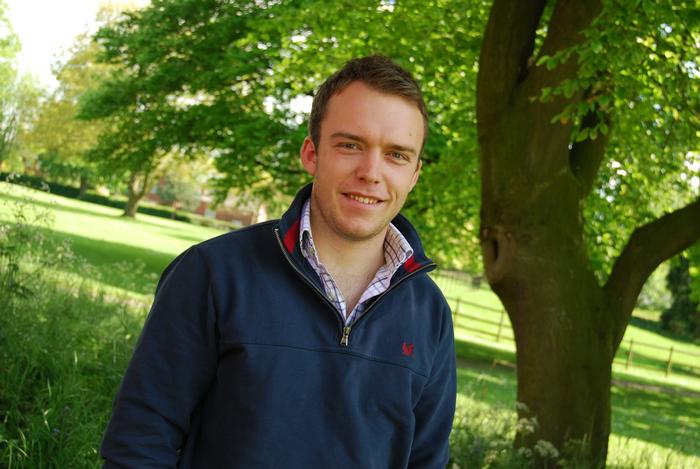 Final year student, Tom Llewellyn, is due to graduate this month and is hoping that studying at Harper Adams will help him to secure a career within the environment and renewable energy sector.

The 23-year-old has always been interested in renewable energy and how it could secure the world’s energy future. As a result, a 50kW solar development is in its early stages of planning on his mixed beef and arable farm in Shrewsbury, where he will become the fourth generation of his family to run it.

Tom, who is due to graduate from the FdSc Countryside Management degree, said: “Renewable energy is a major interest of mine, as I love the concept of harnessing energy for the future in a sustainable way.

“Since being at university I have studied modules about the subject and have grown a passion for adapting land for energy use. I am also interested in how we can convert farm buildings to accommodate it.

“Combining farming with a sustainable environment is important, so if renewables can help, then why not?”

Tom appreciates that renewable energy can spark impassioned debate when it comes to changing the visual landscape of the UK. Concerns also include those surrounding the protection of endangered species such as bats.

He added: “All of this needs to be taken into account when considering renewable energy installations, so it is vital that the land is surveyed correctly.

“Thanks to what I have learned on my course, I have extra knowledge about these issues that I hope will help me to be successful in future job roles.”

Tom first heard about Harper Adams through his relatives and became the sixth person from his family to enrol at the university in Shropshire three years ago. Before starting his degree, he took two years out to work for his relative’s landscape firm and help on the farm.

He added: “I actually only looked and applied for Harper Adams after my family recommended it, I didn’t consider any other universities.

“For me, the best parts are that the lecturers are so willing to help and that the campus is small enough to feel like a community.

“My favourite module has been about landscape development – how the land has changed over the centuries, which should hopefully link in well with my future career plans.”

Tom, who enjoys all sport but predominantly motorsport, worked for the National Trust at Carding Mill Valley during his placement year as a volunteer ranger, and hopes to now work his way up within renewable development.