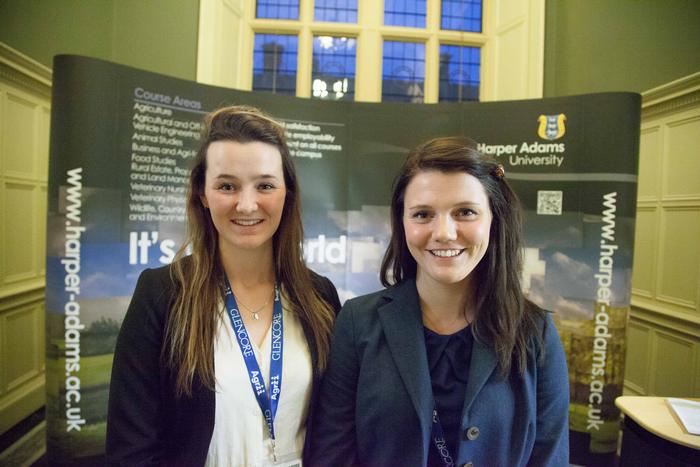 “The Oxford Farming Conference is an annual event which stands out for many of the UK’s agricultural producers and associated businesses within this exciting industry.

For a few days in January, Oxford University and the rest of the city is swarming with the best innovators, researchers and leading companies who contribute to the way in which UK agriculture is run and the way it is perceived by the public and non-farming community.

I was given the opportunity to attend this event after showing a keen interest in the broader aspects of agriculture away from practical farming, eager to delve into the world of business.

It is a well-known saying that any opportunity is what you make of it; Harper Adams students who put in the effort will always reap the benefits.

In this case, both individuals and companies at the Oxford Farming Conference are well aware of the high level of students that the university yields, and are interested in hearing our thoughts and experiences.

The conference allows you to be a part of future plans, policies and emerging technologies, critical to the way we develop this industry. It is not only a first-hand experience of fresh new ideas, but also a fantastic way to meet employers and discuss your future.

Of course, the conference is a social event for many old friends. I realised that as meeting and chatting to one person always led to them introducing you to another - this domino effect of networking is a comforting and exciting way to meet people who work, live, and care about agriculture, in the same way that I do.

Three intensive days listening to guests speak of the challenges and opportunities we are facing and are yet to encounter, combined with meeting some of the best people in the agricultural circle, really gets you excited to start your career.

I am proud to say that I am a Harper Adams student, and the employers are proud to hear it.”

“The Oxford Farming Conference was a fantastic experience and gave me the opportunity to learn about some of the key challenges currently facing the industry, as well as new developments and innovation.

A range of topics were discussed, one of which was a session on politics featuring Defra Secretary of State, Rt. Hon Elizabeth Truss; UKIP MEP, Stewart Agnew; Shadow Minister of State for the Rural Economy, Food and Farming, Huw Irranca-Davies; Parliamentary under-Secretary for DEFRA, George Eustice MP; and Cabinet Secretary for Rural Affairs and the Environment for the Scottish Government, Richard Lochhead.

The range of opinions was varied, which gave a very interesting and heated discussion. Topics such as capping farm subsidies and climate change were very popular and generated a lot of mixed opinions.

Throughout the conference it became clear that although there are many challenges facing the industry, such as red tape and milk prices, it is not as easy as you might think to just change how the industry operates.

In addition to attending the conference meetings, the dinners were also an excellent opportunity to talk to industry leaders and ask their views on challenges facing the industry, and how we might approach them. Very influential people attended this event and it was a great privilege to be given the chance to speak with them.

The debate in the Oxford Union questioned whether intensive farming is sustainable, although I have my own opinion on the debate, both sides were argued well and it was a very enjoyable evening. It wasn’t a huge surprise when the proposition was rejected!”