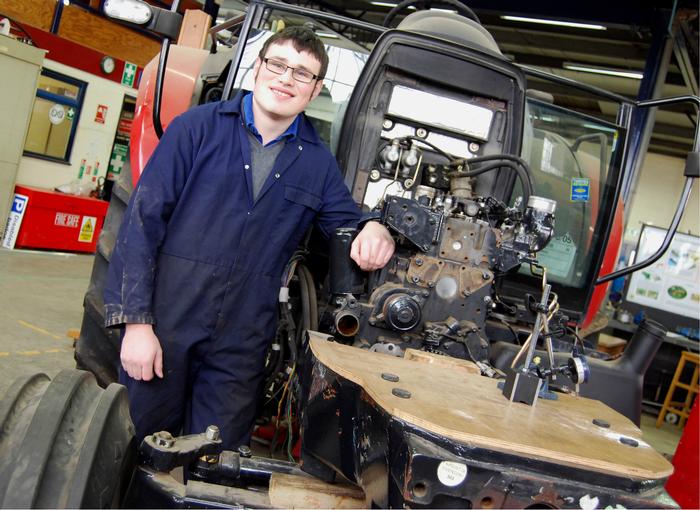 A first year engineering student at Harper Adams University has been shortlisted for an outstanding achievement award by the Welsh Government.

18-year-old Richard Davies has been nominated in the Young Person category of the St David Awards, in recognition of an assignment completed during his Product Design A-Level study.

Richard, from Crew Green on the England-Wales border, designed a wireless camera for use when a vehicle is reversing – a project that also saw him crowned winner of the 2014 Young Engineer for Britain prize, and overall winner of the Welsh Examination Board’s Innovation Awards.

The MEng Agricultural Engineering student said: “The initial project was inspired by my work at home, helping my family to run a contracting business.

“I noticed that it was difficult to reverse large vehicles and realised that there was a gap in the market for some sort of wireless camera device.

“The device is a completely wireless camera which works alongside any Smart device. It’s designed to help people to manoeuvre vehicles whilst reversing, with the capability of allowing the user to change the direction of the camera on all axes.

“What originally began as something for farm machinery, has since been developed for use with caravans and the wider market.”

The annual St David Awards recognise and celebrate the exceptional achievements of people in Wales. They acknowledge people who are making a real difference for the country – either home or abroad.

Richard, a former Llanfyllin High School student, added: “To be shortlisted for the award was most unexpected; I can’t really believe how well the project has done.

“Regardless of the outcome, I hope this accolade will prove a great addition to my CV, as it’s great to be recognised for my hard work.

“I would love a future career working within research and development, and this should prove a good basis for achieving that dream.”

The Young Person category of the awards is given to an exceptional inspirational young person up to 19 years of age in any field in Wales.

The winner will be announced at a special awards ceremony held on Thursday March 12 at the Senedd in Cardiff.

All finalists will receive certificates of nomination and recognition, and category winners will be awarded in addition with a specially commissioned trophy by the leading Welsh sculptor Gideon Petersen.