Many of these men were too young to have married and have children and may now have no family to remember them. So it falls to us, as their family at Harper Adams to remember them here." 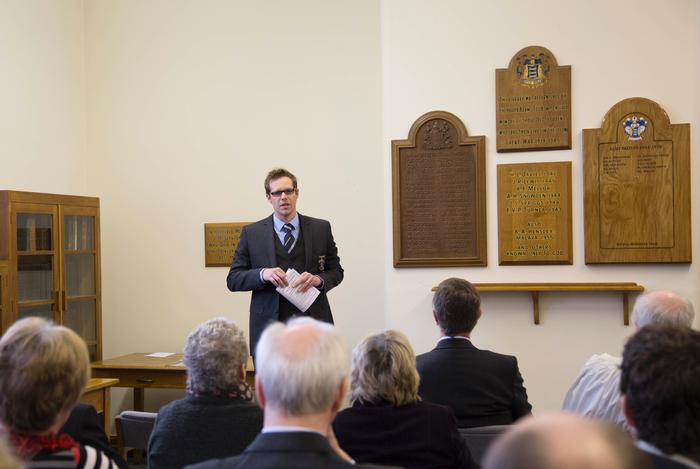 Harper Adams University yesterday held a service of dedication for a new memorial honouring alumni who died in the First World War.

Simon Jones, President of the Harper Adams Club alumni association, explained: “Guy Barnett was born on 31 July 1890 in Church Stretton, the son of Dr Horatio Barnett and his wife Elizabeth.  As far as we can find out from census records, he was their only child so his death must have been a terrible loss to them. The family later moved to Craven Arms, where there is a memorial to him in the church.

“He died on 12 March 1915, aged 24 but his body was never recovered and he is commemorated on the Le Touret memorial in France.”

The service took place in the Haydock Room, which was the original college library, on the first floor of the main Harper Adams building that first opened in 1901. Vice-Chancellor Dr David Llewellyn explained that the room had a long association with the Harper Adams Club almost since the club’s foundation in 1920. Club members issued an appeal in their magazine in 1921 for more books and the library was set up in spring 1922.

“In addition to the many gifts of books, cash donations towards the library totalled £55 6s 6d, which would have a value of approximately £2,300 today. Of that, £48 10s was used to create the first memorial to alumni who died in the War, and the balance was devoted to the purchase of books.”

Simon Jones added: “Two or three years ago when we were trying to find out more about the names listed on our war memorial it became apparent that the list was neither accurate nor complete.  Since then we have researched the records of more than 500 Harper Adams students who attended before 1919.

“As a result of this a further nine names were identified, bringing the total to 40 known World War One deaths.  A 10th name had been recorded incorrectly on the original board and has been included on the new board. A lot of care went into the creation of the original board, which is an important part of our history, so we decided to keep it and record the new names on a separate board.

“We have been unable to confirm about 350 remaining names, either because there are too many similar records or no more records can be found without very time consuming and expensive research which may not yield any definitive results.  However we are satisfied that we have made our best efforts to identify or rule out as many names as possible but there is space on this new board for any more which may come to light.

“Many of these men were too young to have married and have children and may now have no family to remember them.  So it falls to us, as their family at Harper Adams to remember them here.

“A few of the men named here have family members to remember them, such as John Cyril Rees and Thomas Cambidge, who are represented by family members here today.”

Thanks were said to Peter Nunn, from the university estates department who crafted the new memorial, and Mark Hall, head of the grounds team, who worked on a new memorial garden outside. The garden features a sundial bearing the last lines of the Remembrance Day exhortation: “At the going down of the sun, and in the morning, we will remember them.”

The Revd Prebendary Edward Ward, University Chaplain, led the dedication of the memorial and prayers, before Victoria Stead, a student who worked with the alumni office to research the fallen soldiers, laid a poppy wreath at the foot of the boards.

Alumni named on the new memorial who not been commemorated at Harper Adams before are: 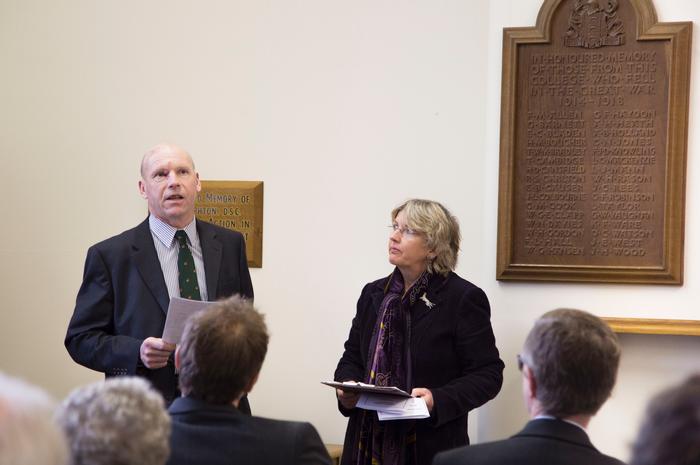 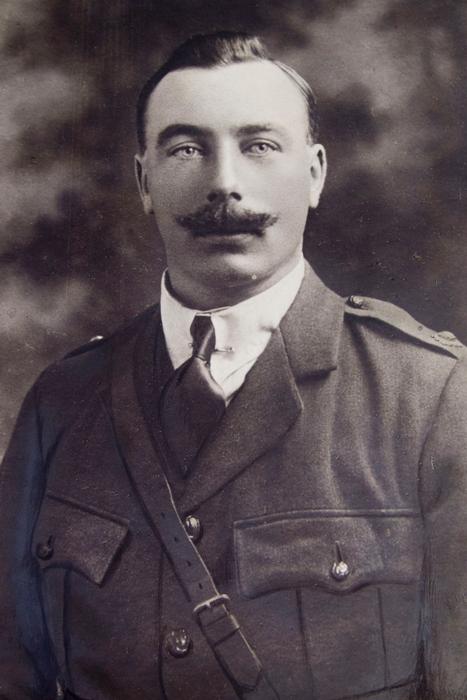 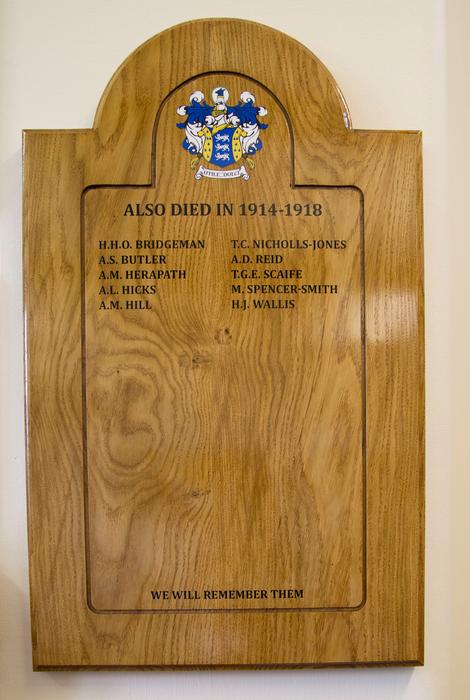 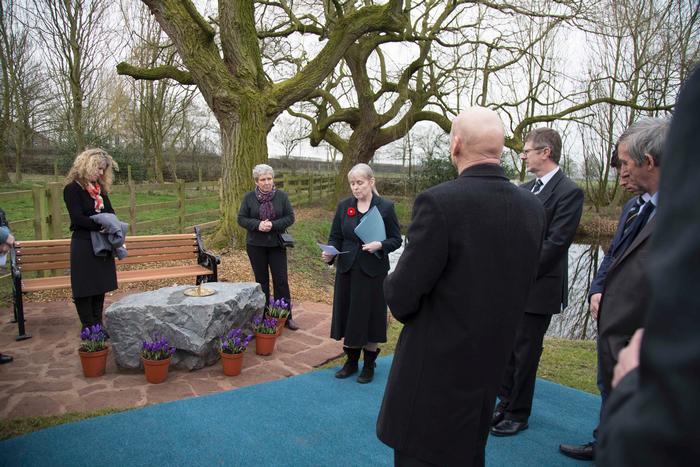 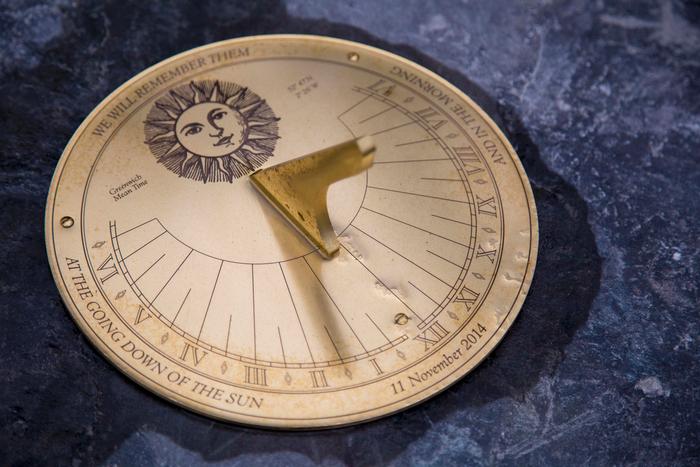 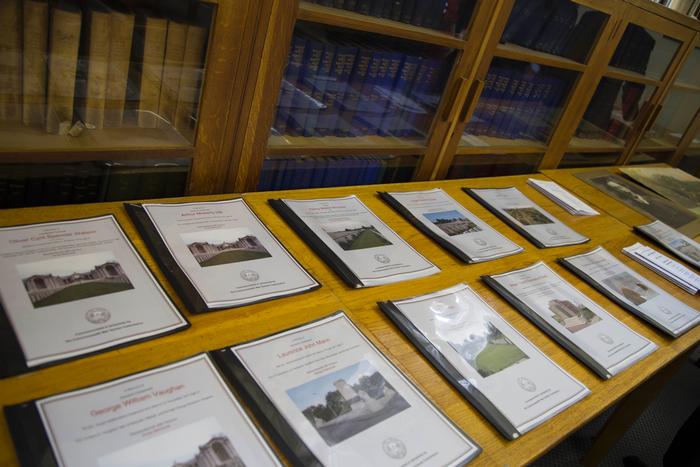 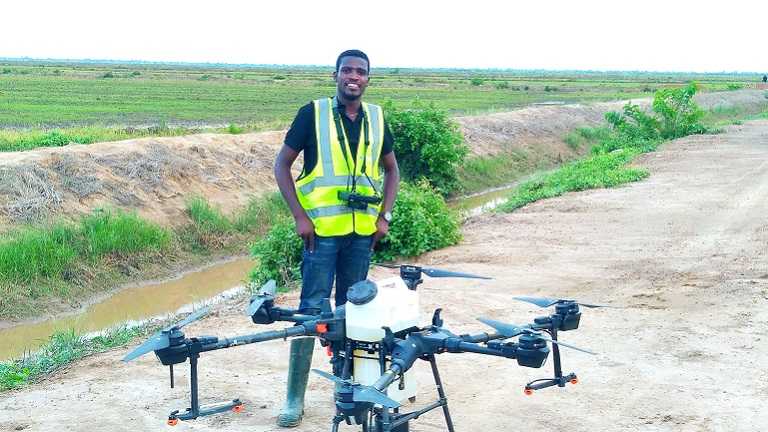