Harper Adams University encourages that same passion, enterprise and creativity in its students, as I have witnessed through the first six scholars, all of whom I met earlier this year. Their dedication to their studies and to the agricultural sector is impressive." 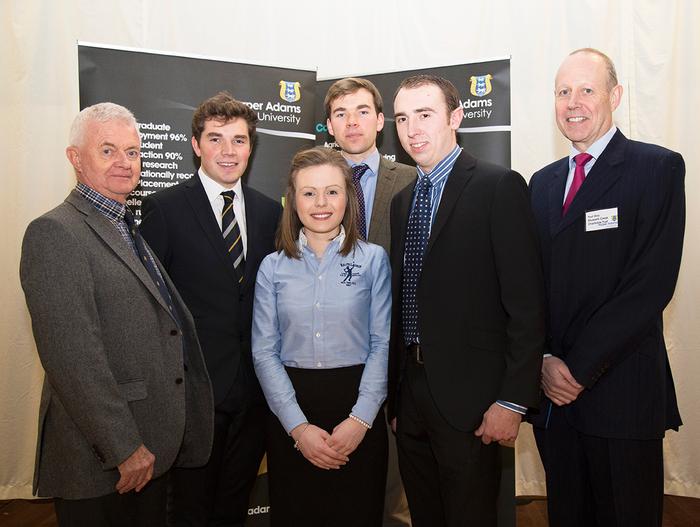 After seeing six students progress with its generous support in 2014/15, the Elizabeth Creak Charitable Trust has again donated £25,000 to Harper Adams University to fund Clyde Higgs Scholarships in the next academic year.

Two postgraduate scholarships worth £5,000 each will be funded by the trust, which was established in memory of Elizabeth Creak, a former High Sheriff of Warwickshire who previously ran one of the county’s largest dairy farms.

The remainder of the money will be used to sponsor undergraduate scholarships.

Elizabeth Creak, born in 1926, graduated from McGill University in Montreal and worked for Allen Lane of Penguin Publishers before returning to England to work with her uncle, Clyde Higgs, eventually becoming his successor.

She passed away in October 2013 and left the bulk of her estate to the Elizabeth Creak Charitable Trust, to provide scholarships in her uncle’s name and to “support and encourage new blood in farming and finance projects to help farmers survive and thrive in their challenging modern environment”.

Trustee Paul May said: “Clyde Higgs was a highly innovative and enterprising farmer who was well known for challenging the status quo and cross-fertilising best practices among farmers in the UK. His practical approach and constant quest for efficiency helped him to significantly increase output. He recognised the same passion and ability in Elizabeth, who became a highly capable and well-respected farmer who brought many creative ideas to the industry.

“Harper Adams University encourages that same passion, enterprise and creativity in its students, as I have witnessed through the first six scholars, all of whom I met earlier this year. Their dedication to their studies and to the agricultural sector is impressive and I am sure they will go on to do great things.

“It is our pleasure to continue to support Harper Adams University students, and I look forward to welcoming next round of scholars into the fold.”

The undergraduate Clyde Higgs scholarship is open to all 2nd Year BSc, Final Year BSc or Final Year FdSc students enrolled in full time education at the University, studying Agriculture, Agri-business, or Agri-food courses. While it is not a requirement of the scholarships, preference will be given to applicants who have a specific interest or background in the dairy industry.

The postgraduate Clyde Higgs scholarship is open to UK resident students entering Harper Adams University in September 2015 to study for a Master’s degree in either Sustainable Agriculture or Crop Production.

Read more about the undergraduate scholarship and apply here.

Read more about the postgraduate scholarship and apply here.