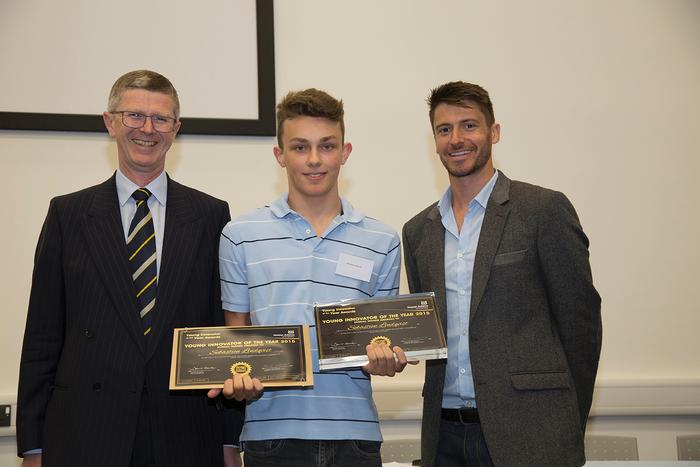 Young robot designers from throughout the UK showcased their talents at Harper Adams University this week, with one being crowned Young Innovator of the Year 2015.

Teenagers were challenged to submit a design to answer the question “What could robots do for us in the future?”

“We wanted to embrace the innovative power of young people’s imaginations”, said competition organiser Lorraine Westwood. “The entries were judged on the ideas and the entrants’ ability to convey them using a poster, video or website – no method was given preference.

“There were some wonderfully creative ideas, but also some incredibly insightful, practical ones. Each and every entrant is to be congratulated for the time and effort they put into the competition, it was a pleasure to review all of the ideas.”

Shortlisted entrants were invited to the university for a prize-giving on June 29th, where they were welcomed by television presenter and engineering enthusiast Rob Bell, who has fronted BBC2’s Engineering Giants and Channel Five’s Underground Britain.

Before congratulating the winners, Rob gave a short talk on embracing “stupid”.

“My name is Rob Bell, I’m a television presenter, I’m an engineer and from time to time, I can be quite stupid…But stupid isn’t uncommon. Stupid can be the way you feel when you are experiencing something for the first time. It can be the way we feel when we are tackling a difficult problem. It is an emotion associated with the learning process. We are stupid and then we are not. So stupid is absolutely fine.

“The only problem with stupid is the emotion that runs alongside it – fear. We are supposed to be afraid of stupid, to get it over with as soon as we can. One way to do that is to avoid entering into new scenarios and new experiences. But then nothing would change, we wouldn’t progress. I think you will all agree that there is no point living life like that. And the reason I know you will agree is because you entered the Young Innovator Awards – you were not afraid of stupid. So the best way to avoid the fear of doing new things is to embrace stupid!”

Having shown the entrants some of the television project he has worked on, Rob went on to present awards to the best female, best male, best team entry and best combined school entries. Both the judges and the Vice-Chancellor also made their own special awards.

•Judges’ Most Creative Award: Aimee McInally, Emily O'Neill and Gaelen Marshall, Boclair Academy, Bearsden, Glasgow, with the Bowel Cancer Basher – a robot that is swallowed and fights cancer from inside the body.

•Harper Adams University Vice-Chancellor’s Award for the best entry to support the food chain: Robert Saunt with The Rumbler, a new type of farming robot that uses biophotovoltaic technology to extract electricity from plants.

Finally, the Young Innovator of the Year was named as Sebastien Lindqvist with his Arctic Ice Regeneration Submarine.

That afternoon, the university also held the finals of its Technical Innovator competition, which challenged individuals or teams to first of all submit designs for a self-contained, fully autonomous robot capable of locating a carrot in a field. Six short-listed entrants took up the challenge to build their robot and bring it to Harper Adams to be tested against the competition.

Professor Blackmore said: “You are all really good. To get your robots built, into the field and testing is highly commendable…I congratulate you all for getting to this stage, I think you have all done a really good job!”

After a tough afternoon of trials, the winner was Anjuli Bali, from Sunbury-on-Thames Surrey. Anjuli is a member of the Pi Club at The Lady Eleanor Holles School. Her “Rover Rabbit”, with a colour sensor to detect orange, achieved the closest position to the carrot and was deemed to have been built to the best standard by judges including Harper Adams Head of Engineering Professor Simon Blackmore, a leading research in the field of precision farming, including agricultural robots.

In second place was Daniel Young, a pupil at Queen Elizabeth’s Grammar School, who travelled to Harper Adams from Market Rasen Lincolnshire, to test his “Robotic Rabbit”

And third was Simran Jolly, from Bushey, Hertfordshire, who designed and built her with brother Kiran, who was unable to attend the finals. Their entry was “Roger Robot”, built from recycled parts – including a sweets tub. Simran is a pupil at Parmiter’s School. 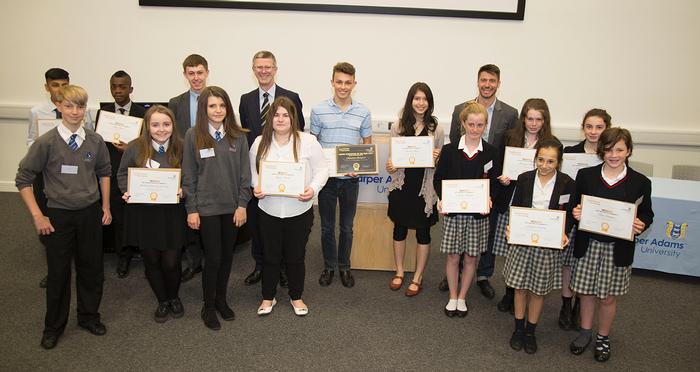 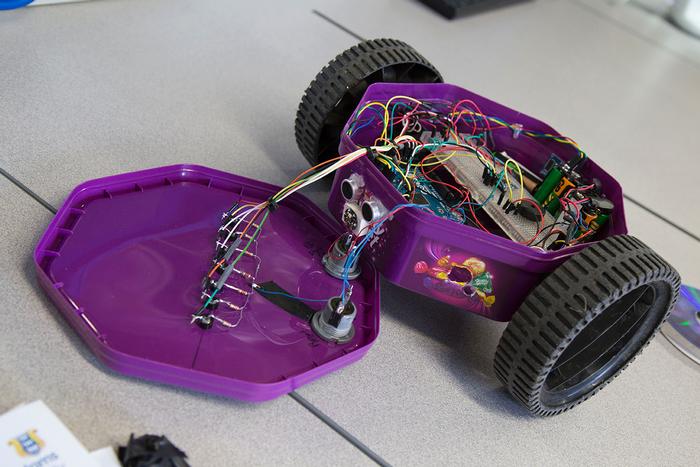 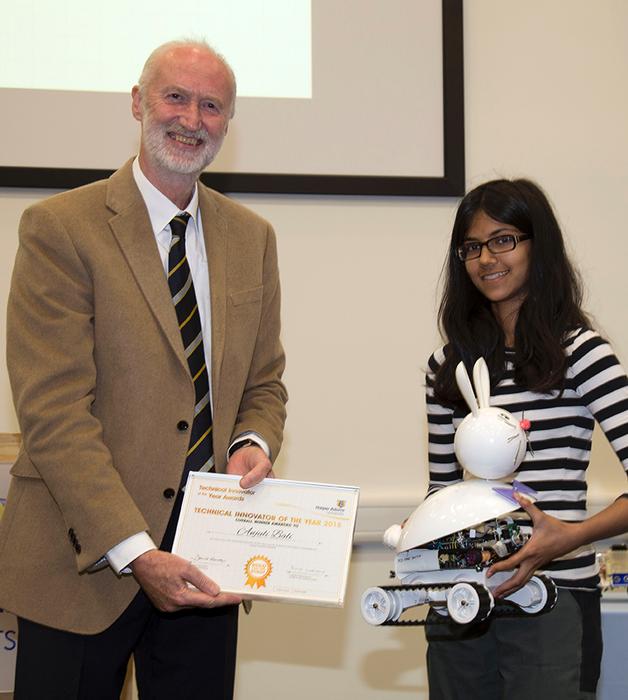 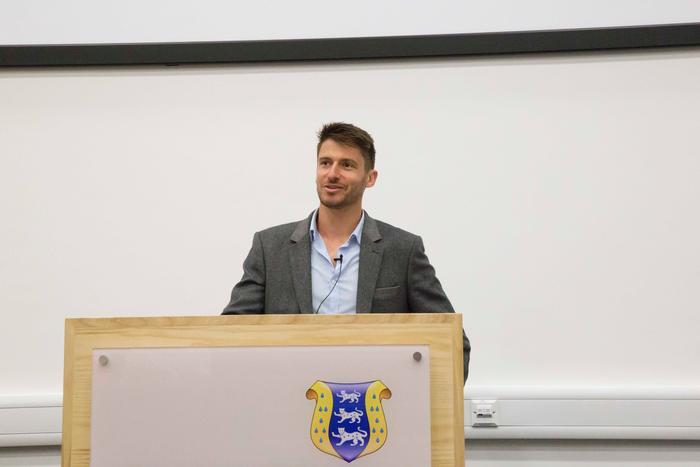 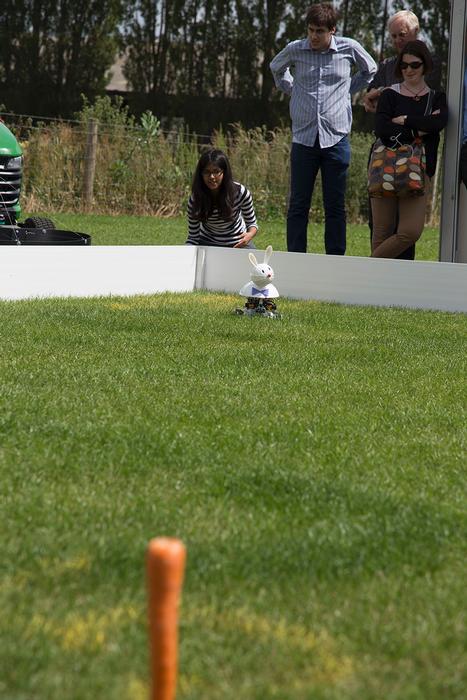