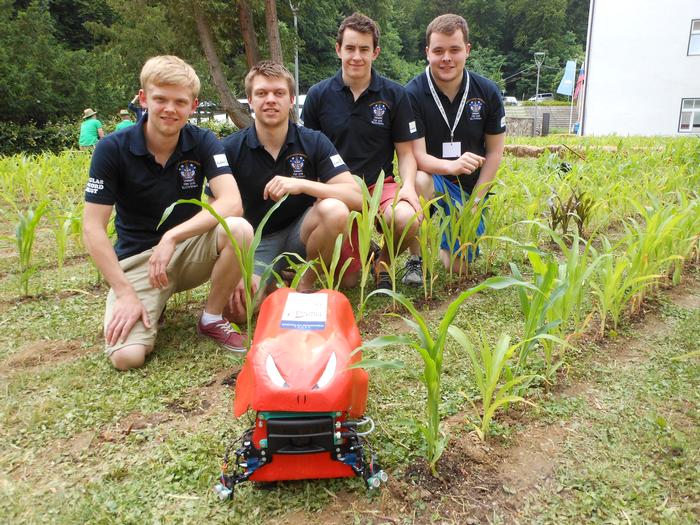 The four students entered ‘Florence’ into the Field Robot Event, an annual, Europe wide competition intended to develop the application of robotic technology to agriculture.  Florence was developed on a relatively tight budget using off the shelf sensors, driveline and microprocessors.

To take part, the robot had to overcome three tasks relating to navigation, advanced navigation and weed control. The scores from the three tasks were then combined to produce a final ranking.

Florence faced stiff competition from robots from across Europe, including Germany, Netherlands, Turkey and Romania. This year, the event was held at the University of Maribor, Slovenia’s second largest university.

Florence was built by Alec Henderson, Jake Smith, Max Thorne and James Townley, who all study engineering at masters level at Harper Adams, as part of their final year group project.

23-year-old Max Thorne from Dunstable said: “Having the opportunity to compete against other universities and professional teams across Europe has been fantastic. The group initially had very little experience with robots, and we did a lot better than expected.

“I am looking forward to transferring the skills this project has developed across into industry when I graduate.”

Alec Henderson, 23, from Shipston-on-Stour said: “Our brilliant results at this event demonstrate that we have the skills required to work in the off-highway engineering industry.

“Our teamwork, knowledge and practical skills enabled us to beat more experienced European university teams, who have been competing in the event for a number of years.

“We are pleased to have proven ourselves, and thank our sponsors for their support which allowed us to enter the competition."

The Field Robot event, in its 12th year, is the only open-air agricultural field robot contest in the world, organised by Fontys University of Applied Sciences.

It invites students and educational institutions to enter the competition and be as creative as possible, with no restrictions applied to robot design or construction.

It champions the concept of agricultural robots working autonomously in-field, carrying out a variety of tasks such as weeding, spraying and disease monitoring.

Team Florence was funded by the Douglas Bomford Trust and CLAAS Stiftung.