"I was absolutely overwhelmed to be nominated by Harper Adams for the award, let alone short-listed as a finalist! It's such a fantastic way to round off my time at university. I'd like to thank Harper Adams and the Agriculture team for what has genuinely been the best four years of my life." 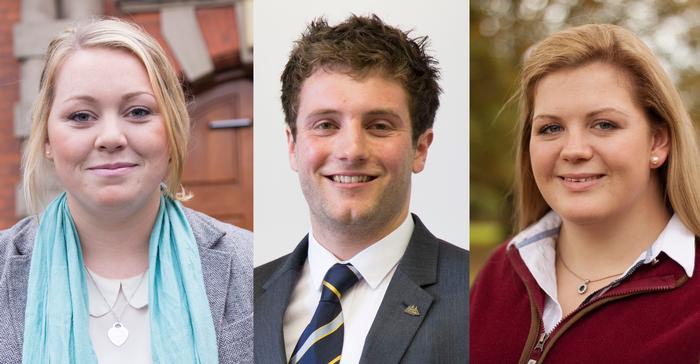 Harper Adams University yet again dominates the short-list for the British Farming Awards Agricultural Student of the Year Award.

Three of the five award finalists have just completed their studies at Harper Adams and will graduate next month - and might now follow in the footsteps of previous title winners and Harper Adams graduates Jocelyn Orr (2013) and Ross Edwards (2014).

Dr Russell Readman, agriculture courses manager, said: "I am extremely proud that Harper Adams agriculture students yet again feature strongly among the finalists for Student of the Year."

Finalist Joe Parry, 22, from Corwen, Denbighshire, completed the BSc (Hons) Agriculture degree with first class honours. In May he was revealed to have been the best performer on his work placement year, of all BSc Agriculture students, winning the inaugural Agrovista Placement Award at Harper Adams University. Joe spent one year of his four-year honours degree working for John and Marion Tilson at Wedderlie Farm in Gordon, Berwickshire.

He worked with a pedigree Aberdeen Angus herd and 1800-strong sheep flock, to gain knowledge about the successful management of a profitable livestock farm

Joe, who is returning to run his family’s farm, rearing beef, sheep and Welsh ponies, said: “I was absolutely overwhelmed to be nominated by Harper Adams for the award, let alone short-listed as a finalist! It's such a fantastic way to round off my time at university. I'd like to thank Harper Adams and the Agriculture team for what has genuinely been the best four years of my life.”

Catherine Bennett, 22, from Meifod, Powys, studied BSc (Hons) Agri-food Marketing with Business Studies and completed her placement year at McDonald’s Restaurants Ltd Headquarters in London, where she worked for the agriculture team within the supply chain department.

An active member of Montgomery Young Farmers, Catherine was one of just two students selected to represent the National Federation of Young Farmers’ Clubs (NFYFC) at the 2014 International Summit of Young Farmers in France and has also represented the NFYFC at the European Council of Young Farmers Spring Parliament in Helsinki, where she discussed issues that policy holders need to address to support the future of young farming.

Since completing her studies, Catherine has joined The Co-operative Group as Junior Agricultural Manager.

She said: "It is such a privilege to have been short-listed for Agricultural Student of the Year, considering the number of high calibre students in the UK. I am looking forward to sharing the awards evening with the other finalists, celebrating our achievements and British agriculture."

Amy Sharpe, from Woodhall Spa, Lincolnshire, graduates with BSc (Hons) Agriculture. Amy was inspired by her placement year at Moy Park, part of the British Poultry Council Scholarships programme at Harper Adams University, to complete a final-year research projects investigating the potential of an alternative protein source for use in poultry diets.

Amy was also part of a team that helped to raise more than £40,000 for an African farming charity by climbing Mount Kilimanjaro. She took part in the challenge alongside colleagues from Lincolnshire egg business, LJ Fairburn & Son. Amy is currently travelling in Canada and the USA but will be returning to Fairburns as their agricultural manager.

She said: “It's such an honour to be shortlisted for the Agricultural Student of the Year. I'm looking forward to celebrating the achievements of the other finalists within agriculture at the awards ceremony. I'm eternally grateful to Harper Adams and all the staff and friends I've made during the past four years in helping me get this far!”

The winners will be announced on October 15.