Students to sing in Christmas concert 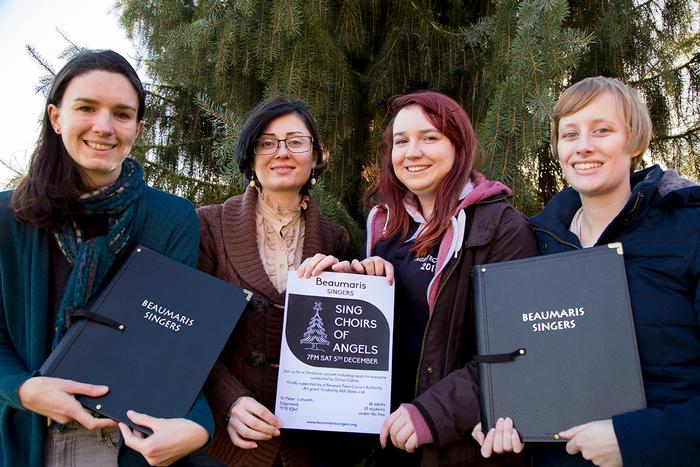 A group of students from Harper Adams University are encouraging members of the local community to attend a Christmas concert next week in Edgmond.

Newport-based chamber choir the Beaumaris Singers are hosting ‘Sing Choirs of Angels’ on December 5 at St Peter’s Church in Edgmond. Several students sing with the choir and would love to see their peers and members of the local community in the audience.

Grace Stoddart, from Sheffield, a 19-year-old Animal Behaviour and Welfare student, is in her second year of singing with the choir. She said: “As the concert will be so near to the University, we wanted make sure that everyone on campus is invited.

“We have been preparing the music since the beginning of November and will perform a wide range of well-known and more unusual carols, including some for the audience to participate in, so there should be something for everyone!”

The group, led by Director Simon Collins, rehearses once a week on Tuesday evenings at Cosy Hall in Newport, performing both a cappella and accompanied music that spans five centuries.

Harper Adams University’s involvement with the choir has increased over the last few years. Postgraduate research student Fran Sconce, 30, has been recruiting members from the University community and said: “I have been singing with the choir for three years and I find it welcome relief from the stress of study. It is also a chance to reach out and meet some local people.

“I hosted a stand for the choir at the clubs and societies freshers’ fairs in 2014 and 2015 and found students from all study levels and disciplines keen to take part, some with extensive choral experience and others almost none.  Five students regularly sang with the choir in the last academic year and we hope that more than ten of us, as well as a University staff member, will sing in December.”

Choir Director Simon Collins, said: “The Beaumaris Singers have been pleased to welcome students from Harper Adams over the last few years and we look forward to sharing their efforts with the University at our Edgmond concert.

“The choir provides an opportunity for all ages to sing a wide range of music to a high standard and to pursue an interest which is often a welcome contrast to everyday student and working life. We hope the relationship between the choir and students will continue for many years to come.”

Singing in the choir is just one of many musical activities for MSc Food Industry Management student Rebecca Park, who also plays viola with the Telford Orchestra, is part of Midland-based folk-band Greenman Rising and has taken part in music workshops in Shrewsbury.  The 25-year-old, from Watford, said: “I studied three instruments to Grade 8 at school and joined several orchestras whilst an undergraduate and music scholar at Birmingham University.

“I was so pleased to hear about the Beaumaris Singers being so close to campus and have enjoyed singing with the choir since September and taking part in their October concert in Market Drayton.  Music is very important to me and I could not imagine being without it in my life!”

As well as formal concerts, the choir performs to raise money for charity. In December they will sing in Newport, at a care home and a supermarket, as well as with local secondary school, Burton Borough.