"You were all amazing, helping not just us but many more who were stranded in the floods today in Windermere!” 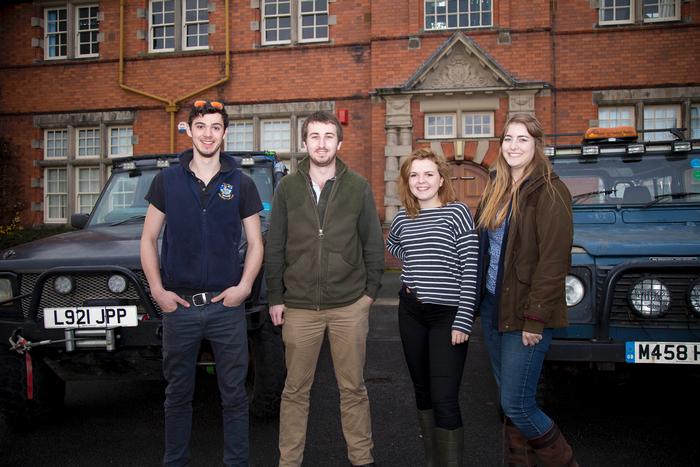 A group of 4x4 enthusiasts from Harper Adams University were praised today after rescuing a series of vehicles from floods in Cumbria, where many areas have been badly hit by storm Desmond.

Members of the Harper Adams University Off-Road Team were on an unofficial trip to the Lakes, where they planned to spend the weekend “green-laning” – driving along unsurfaced roads on which vehicles are permitted, but which are difficult or impossible for normal cars to use.

In five Land Rovers, they had planned to take in about 100 miles of different lanes, but thanks to the floods managed just one lane – and only after they had spent more than four hours rescuing fellow drivers and even stepping in to avoid a wedding being ruined.

Paige Mather explained: “One of our members is on placement at Grange over Sands, so we were staying with her. On Saturday we were just getting into Windermere when we started to see lots of flooding. Then we stopped and came across a man in a Volkswagen stuck in the middle of the flood.”

Jack Thorman continued: “We got him out of this mini-lake, undid the air filter and saw that he had water in his air intake. He asked if we could tow him back to his hotel, so I took him to Bowness and the others continued to save a few more people.”

“We drove on and got to another section of road with more vehicles stranded in the middle. One car contained a whole family including a small baby. James Brothwood towed them out and back to their hotel,” said Paige.

“While everyone else was towing vehicles away, the rest of us were telling people not to drive in the water; that their cars were not suitable and they could flood their engines. Some people were glad to have us there but others got upset and didn’t think we knew what we were doing. It was great in Ambleside when cyclists were cheering us!”

The group all met up again at a third “road lake” where they found four cars and a tractor. Jack said “The water was half-way up the tractor wheels so it was quite deep. I decided to take one truck through to see if it was ok. When we got to the other side I radioed back and everyone else came through.”

One of the drivers rescued on Saturday was Zoe Dixon, who had a wedding deadline to meet. She took to Facebook to thank the helpful students, writing: “Just wanted to say a huge thank you to all the lads and lasses from your uni who are up in the lakes…You were all amazing, helping not just us but many more who were stranded in the floods today in Windermere!”

Zoe later said: “I had gone through the flood and my car broke down. The students were all so kind and they managed to get us to the hotel we were decorating for a wedding. Jack gave me his number in case I was stuck and couldn’t get home but my dad managed to get through and rescue us.

“It was fun in the Land Rovers as I haven’t been in one for years! They were great and I can’t thank them enough.”

Tired and very wet from their heroics, the group still managed to drive a green lane – but faced further watery tests for their driving and mechanical skills, honed thanks to the off-road team. Jack said: “We came out of the lane and on the only road back was the worst flood we’d seen all day. It was almost bonnet height.

“We had to take the bonnet off Dave’s truck, and strap the air intake up, so it was high enough off the bonnet that it wouldn’t suck any water in.

Hannah Gill said: “But Harry didn’t have a snorkel so he had to get a bow wave going so he didn’t get water in his air intake – that was quite scary!”

The wet weekend heroes are keen to stress that everything they did is all part and parcel of being off-road enthusiasts. “We’d never just drive past someone in a flood, said Paige.

“It’s all part of off-roading,” explained Jack. “If you spot another Land Rover or car broken down, you see if you can help get them going”.

“Yes, because we know how it feels to break down!” added Chris Green.

The Harper Adams Off Road team meets regularly to share their love of 4x4 driving and maintenance. Learn more on their Facebook page.

The students involved in the flood rescues were

•  Paige Mather, 19, from Atherton near Manchester. 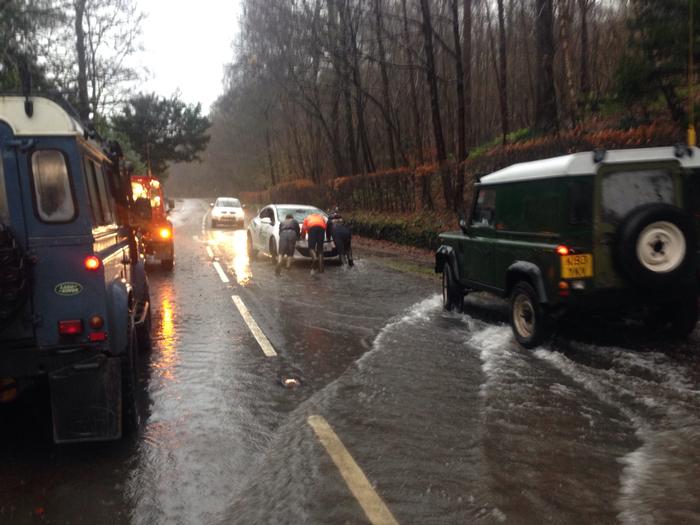 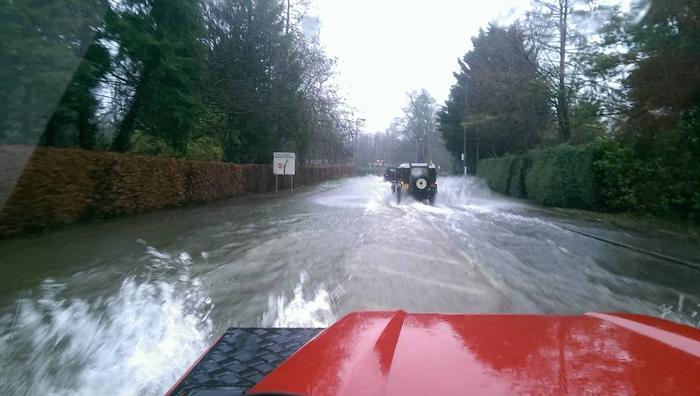