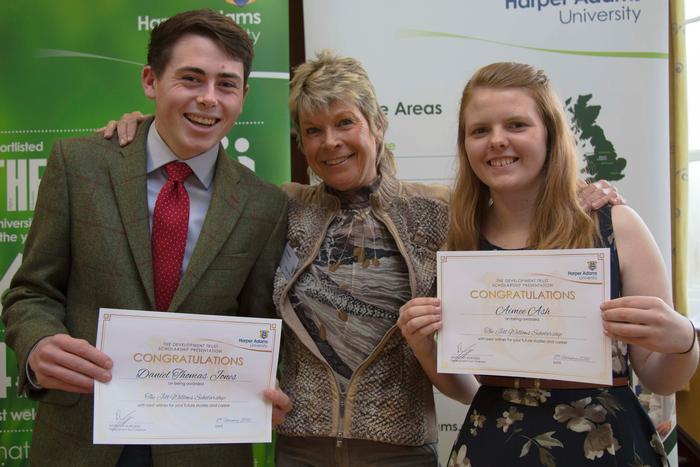 Daniel Jones, 20, from Ruyton XI Towns in Shropshire was awarded £1,500. He said: “I applied for the scholarship after my parents pointed out that I had nothing to lose and everything to gain!”

Dan, who studies Agriculture with Farm Business Management, plans to go to America next year for his placement year to gain international agricultural experience.

He added: “the award of the Jill Willows Scholarship will help with the costs of the flights and gaining an American Visa.

“I feel fantastic and immensely grateful after being awarded the Jill Willows Scholarship, the fact that someone is supporting my learning and development is incredibly reassuring”.

Daniel’s ambition for when he graduates in 2018 is to travel the world, gaining experience from farming systems abroad before returning back to either run his own farming business or to manage a farming business.

The second student in receipt of a £1,500 Jill Willows Scholarship this year is Aimee Ash, 21, from Peterborough, who also received a Clyde Higgs undergraduate award.

Aimee, who is currently in her second year of an Agriculture with Animal Science degree, applied for the scholarships so she could further her knowledge and skillsset by undertaking several land-based courses. She also plans to travel to Europe to look at high-performing dairy farms.

“The awards have given me a big self confidence boost that both awards committee felt I was worth sponsoring,” she said.

In the future, Aimee hopes to manage a successful grass-based dairy business, with the option of going into consulting later on in life.