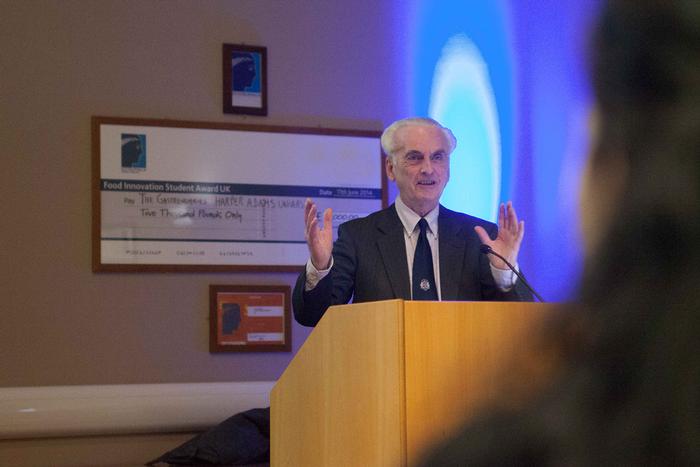 Honorary Graduate and world-renowned scientist, Professor Hugh Pennington, CBE, recently returned to Harper Adams to meet with students and to give a lecture on the subject of “E.coli O157, Hillsborough, and Aedes aegypti: A personal view”.

Professor Pennington is Emeritus Professor of Bacteriology in the University of Aberdeen and an Honorary Doctor of Science of Harper Adams University, the award of which was made at the University’s Graduation ceremony last September.

After meeting a group of Food Science students Professor Pennington spoke to a packed Regional Food Academy Lecture Theatre audience of staff and students from across the University.  The lecture covered food safety and the food chain, reviewing two of the most influential food poisoning incidents in the UK in the last two decades, the E.coli O157 outbreaks in central Scotland in 1996 and South Wales in 2005.

As the Chairman of both Committees of Enquiry that resulted from these incidents, Professor Pennington was well placed to question the value of public enquiries and to discuss how microbes make planning for the future very difficult.

During his talk he touched on other food chain issues such as the Shetland fish scam, the 'Horsegate' fraud that broke in 2013 and food safety incidents overseas. He concluded his lecture by outlining some of the challenges we now face, such as the evolution of E.coli 104, the recent Ebola outbreak, the problems associated with the Aedes aegypti mosquito and the emergence of the Zika virus.

Professor Pennington reminded the audience of humankind’s capacity to forget lessons learned by previous incidents and the need to be vigilant in maintaining our guard against new diseases and their causes.

Speaking after the wide-ranging lecture, University Vice-Chancellor, Dr David Llewellyn, noted that it had provided “Thought-provoking insights into the ways in which we address matters of public health, and the critical role of epidemiology in understanding the causes of incidents of infection arising from within the complex global food chain, as well as in more general settings”.

Professor Pennington kindly donated a copy of his book, ‘Have Bacteria Won?’ to the University, which will shortly be available in the Bamford Library.