Take a talented, exceptional team of marketing professionals, a global challenge to feed the world and a handful of dead bugs and you have an award-winning marketing campaign!”

Harper Adams University has tonight lifted a Guardian University Award – after entering for the first time.

The university was among three shortlisted for the Marketing and Communications Campaign Award, for its Edible Bug Challenge, which toured agricultural shows last year, engaged more than 5,300 members of the public and secured newspaper, television and radio coverage throughout the UK.

Delivery of the challenge was spearheaded by Marketing Officer for Shows and Events, Sarah Swinnerton, who was in London tonight to collect the award. The challenge was supported by not just the Marketing and Communications team, but by staff across the university, students and partner organisations.

Minutes after receiving the prize, Sarah said: “I’m so proud! Just being shortlisted for such a prestigious award was humbling, but being named winners of the Guardian University Award for Marketing and Communications Campaign is a credit to the amazing team behind the Edible Bugs Challenge. Now I can’t wait to take out Ultimate Bug Challenge on the road in 2016!” 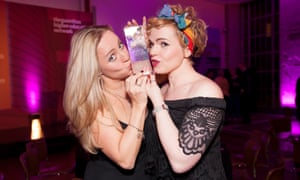 The Edible Bug Challenge was devised as a means of attracting people to the university’s stands at agricultural shows throughout the UK and Ireland.

The show season is important to the university, which specialises in education and research for the agri-food industries. While many exhibitors give away freebies or run prize draws, Harper Adams has always tried to offer something more interactive.

The challenge was developed after members of the marketing team volunteered to appear in a video about entomology research – specifically about entomophagy, the practice of eating insects –for an A-Z of entomology.

Addressing issues of global food security lies firmly at the heart of the university’s strategy. As the developing world’s population booms, and its wealth grows, diets are catching up with those of the West. More protein is in demand and insects offer a low-cost, low-impact, sustainable solution to this problem.

Upon learning of the Guardian win, Director of Marketing and Communications, Lorraine Westwood, added: “Take a talented, exceptional team of marketing professionals, a global challenge to feed the world and a handful of dead bugs and you have an award-winning marketing campaign!”

The Edible Bug Challenge resulted in a 159% increase in Harper Adams University’s interactions with visitors to shows from 2014 to 2015 – at one event, footfall by increased 517% on 2014

The team has now ordered in some bigger and crunchier bugs – and looks forwarding to challenging anyone who thinks they are brave enough throughout 2016.