The aim of the event was to foster international collaboration between researchers from here in the UK and in Thailand." 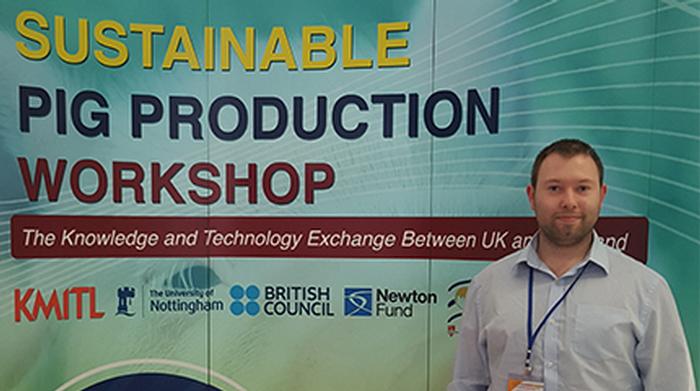 Earlier this month Stephen Mansbridge, lecturer in animal science and bioinformatics, travelled to Thailand to attend a workshop on sustainable pig production.

I recently travelled to Bangkok in Thailand for the ‘Sustainable Pig Production Workshop: the knowledge and technology exchange between UK and Thailand’.

Pig production supports the incomes and livelihood of 200,000 small and medium-scale farmers in Thailand. They produce about 9.5 million pigs per year, which is about twice that of the UK (about 4.5 million pigs per year) but which are a mixture of native and commercial breeds, mainly for domestic consumption.

The aim of the event was to foster international collaboration between researchers from here in the UK and in Thailand, so that we could share our findings and learn from each other, as well as network. The knowledge gained will also be used in support of our teaching and research here at Harper Adams through courses such as our MSc programme in pig production which is part of the monogastric suite of programmes (including poultry production and aquaculture).

My research interests are in monogastric health and nutrition. In particular, the biological mechanisms underpinning the interactions between enzymes, minerals, prebiotics and macro nutrients on immunology, physiology and gene expression.

While in Thailand, I presented my academic poster on the topic of increasing the efficiency of phosphorus use in pig production under resource limitations, which was really well received.

I flew out the day before the workshop was due to start. I’d never been to Thailand before and since being accepted to go I had been looking forward to seeing a whole new culture as well as building up my professional network.

The trip was highly educational, with presentations by a number of experts from both countries. One of the presentations that stood out to me was on the specifications for defining meat quality aspects in Thailand, because we have very different requirements here in the UK. This is largely due to the differences in culinary techniques of preparing and cooking pork dishes between the two countries and we now need to ensure that we continue to optimise the pork products being produced to suit each market.

There was also the opportunity to visit some of the sights the country has to offer. I visited central Bangkok and took a river tour, which I found to be a good way of seeing some of the sights not accessible by road, including a small floating market.

I look forward to working with some of the people I met during the trip in the near future.

I’m very pleased that I was able to take this opportunity which was made possible by the Researcher Links scheme, offered within the Newton Fund, through the British Council and the Thailand Research Fund. The workshop was organised by The University of Nottingham and King Mongkut’s Institute of Technology, Ladkrabang.