‘The Chicken Apprentices’ visit Faccenda after winning against peers

For the module's tutorial, I created ‘The Chicken Apprentice’ where I asked the groups to design a biosecurity plan for an integrated broiler production company in just over an hour." 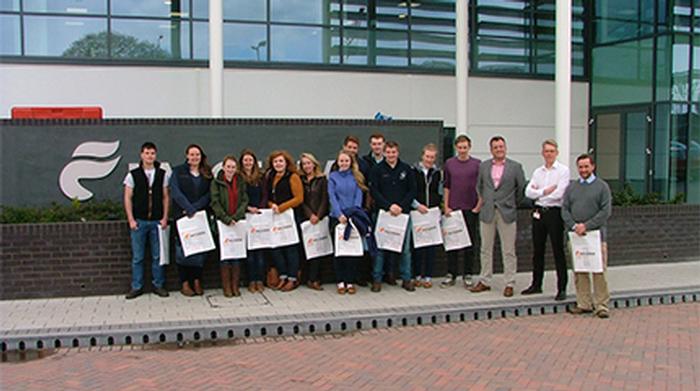 Dr Philip Robinson, Senior Lecturer in Farm Animal Health and Welfare, said: “This year, I taught 120 students poultry health as part of the farm animal health module. They were a mixture of second and fourth year students.

“For the tutorial, I created ‘The Chicken Apprentice’ where I asked the five groups to each design a biosecurity plan for an integrated broiler production company in just over an hour.

“In the session, they had to create a poster on biosecurity for each aspect of the production chain, which included hatchery, feed mill, broiler breeder farm, broiler rearer farm and slaughter and processing plant. At the end of the tutorial, they had to orally present their posters.

“All of the groups approached the task really well, but I was particularly impressed with the winning team’s enthusiasm and teamwork.

“As a prize, I was able to take them to Faccenda’s processing plant in Telford, thanks to the help of Maria Simpson in Harper’s careers department and Faccenda’s operations director Phil Davidson.

“We toured the facility where we learnt about Faccenda’s operations across the UK from Mike Palmer and Phil Davidson. Phil also gave some really interesting feedback on the posters, and encouraged the students to consider a future career in the industry.”