It was great to follow a project all the way through, and I imagine it’s now something that they are going to be using for many years. It was really exciting to be involved in." 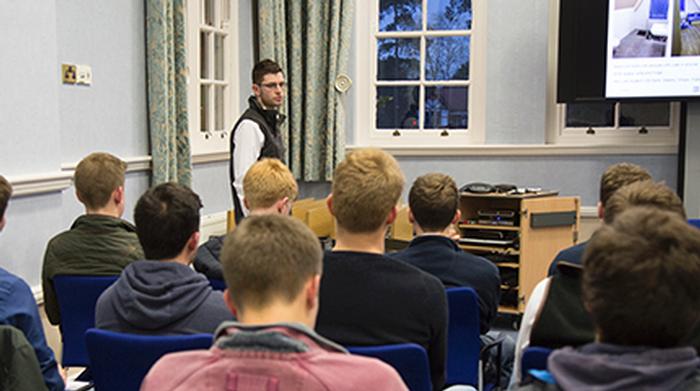 Harper Adams University student and CLAAS scholar Hywel Phillips, 22, has shared his experiences of his placement year in Germany with hopeful future scholars.

Speaking to a room of engineering students, hoping to be the next CLAAS scholar, Hywel said: “While working at CLAAS UK I was working in technical and mechanical roles.

“I really enjoyed my time working alongside their mechanics and technicians. I learnt a lot from them and gained a lot of confidence and appreciation for what they do.

“I finished at CLAAS UK in the September and then went to Germany to the company’s headquarters in Harsewinkel.

“I was based within research and development, working in a department doing testing for future developments. This included all the field testing and all the bench testing; which means testing throughout the winter trying to simulate harvest conditions. I was put into this department as I had expressed a wish to work there.

“During my time, I was given a big project to complete. I got to work on the project the whole way through, including; the design process, concepting, doing final CAD designs, purchasing components and then manufacturing. For this part I worked alongside the German guys in the workshop and it was a really good chance to put my German into practice. I then tested the product and then got it to work on a harvester.

“It was great to follow a project all the way through, and I imagine it’s now something that they are going to be using for many years. It was really exciting to be involved.

“Living abroad is an aspect of this placement which is very different to many others out there. It was one of the elements which made it so enjoyable. I got to see things that you don’t get to normally see everyday.

“I met so many different people and learnt a new language; which isn’t something that you should be scared of. I had lessons and they were enjoyable to go to.”

Alongside the placement year, the Claas scholarship provides an award of £3,000 in the successful student’s second year of study, and sponsorship in subsequent years dependent on performance.