the winning team developed an application for a mobile device that's connected to the neck of the leading sheep, so when movement is registered it will send an alarm to the farmer.” 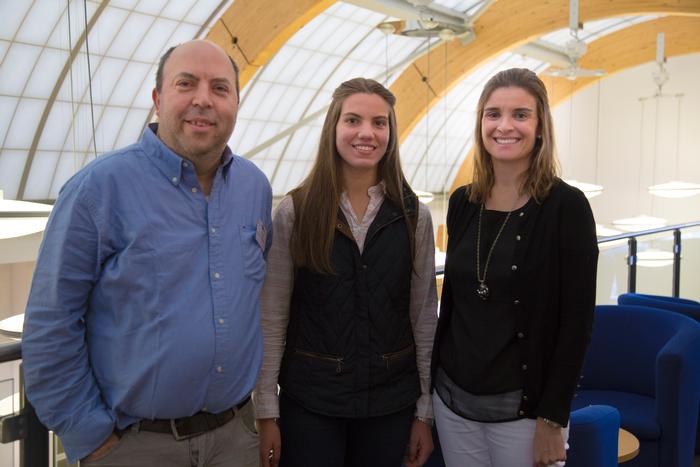 The winners of a hackathon competition in Uruguay have attended a conference at Harper Adams University as part of their prize.

Lucía San Román and Sergio Gorrochategui were part of Team Vigiator, which won the first Hackathon Agro at Expo Prado in September 2016.

Their winning project was an app which fundamentally works like a digital cowbell aiming to combat sheep rustling.

As a prize, members of the winning team were invited to attend the Agri-Tech East REAP Conference in England, followed by the Drones for Farming Conference at Harper Adams.

Dr Leticia Chico-Santamarta, coordinator for the Latin America and Caribbean partnerships for Harper Adams and one of the mentors during the hackathon said: “The theft of livestock, as well as predators that kill sheep, is a frequent problem for sheep producers.

“To solve this, the winning team of the first HackathonAgro at Expo Prado developed an application to connect the mobile device that was connected to the neck of the leading sheep, so when there was a movement registered it will send an alarm to the farmer.”

In total, 14 teams participated in the hackathon, which Harper Adams supported through staff members Dr Chico-Santamarta and Dr Richard Green acting as mentors.

Team Vigiator was made up of agronomy student Lucía San Román and the partners and directors of Jalumar (a company dedicated to the development of applications for Android) Martín Alurralde y Sergio Gorrochategui.