"Brexit is a greater issue for the younger generation. Decisions being made now could colour the political framework for a generation, making it more pertinent for you than me. We’ve got to be positive about our future. It’s an enormous challenge, but we mustn’t be intimidated or cowed by the enormity of the situation."

Balancing food and environmental needs, maintaining the flow of migrant workers to provide labour for fresh produce farms, and greater pride in British produce were just three key topics raised in a round-table discussion about Britain’s future outside the European Union.

The discussion, involving Harper Adams University students and Guy Smith, the Vice President of the NFU, aimed to look past the arguments for and against Brexit. Instead it sought the younger generation’s view of the implications of Brexit and creating a viable domestic agricultural policy.

Launching the discussion, Guy Smith said: “Brexit is a greater issue for the younger generation. Decisions being made now could colour the political framework for a generation, making it more pertinent for you than me.
“We’ve got to be positive about our future. It’s an enormous challenge, but we mustn’t be intimidated or cowed by the enormity of the situation.

“Lots of events are going to occur over the next two years as we negotiate our leaving terms, and so the NFU is going to have to be fast-footed and agile to react to them.

Mr Smith began by raising a few key points: “Firstly, the possibility of access to British markets being given to overseas farmers in order to have lower-priced products, despite these countries potentially having less regulation on farming than in Britain, making it unfair competition.

“Secondly,” he added, “farmers are part of the largest sector of the British economy – the food sector. If agricultural production was exported, then other parts of that industry could also be exported.”

Student Helen Brown, BSc (Hons) Agriculture with Crop Management, asked about the future of pesticide legislation. “If we make it harder for companies to bring pesticides into the UK, are they going to bother? Also, are our farmers going to have access to products that those in other countries do?” she asked.

Mr Smith admitted the question was on his mind too: “It is really complicated. You’re right that the legislation presently comes from Brussels, but we currently have the ability to inform the debate with science and to argue our case for local solutions.

“I’ve spoken to the minister, George Eustice, to discuss how he sees this in the future – what level of pesticide control we will take back into the Whitehall regulation framework, so this is a live issue.”

Some comparisons were made between the UK and New Zealand. Mr Smith highlighted the differences between the two countries, which prevent NZ being a straightforward role model for future British policy. “It’s quite a popular opinion among politicians that we should ‘just do the New Zealand model’, believing that would make us more innovative.

“But what is often overlooked is that New Zealand has a very different agricultural landscape: it is very isolated in the world; it has to rely on exports and it has a very thinly spread population of three million on a landmass the same size as the UK. They don’t have to operate in urban environments, as British farmers have to, and they also don’t face the same competition law environment as we do.”

The need to maintain access to a migrant workforce was raised by Jack Davies, FdSc Agri-Business student. “Some of our farmers are very dependent on migrant workers. I know a couple of farmers who couldn’t survive without seasonal workers. How would they cope?” he asked.

“That’s obviously a politically red hot topic at the moment, and there currently appears to be more heat than light,” responded Mr Smith. “We will need access to that labour pool, especially for horticulture businesses. I think it’s important, especially as it’s nutritious, healthy food that the fresh produce sector creates. If that’s not done here, the food will have to be imported.

“But there are some machines out there that could do the work,” said student Ben Bull, BSc (Hons) Agriculture. “And therefore ultimately we might not need to rely as much on a seasonal labour force as the farmer could use robots instead.”

“I am keen to see places like Harper Adams developing this technology, such as driverless tractors,” said Mr Smith. “We should be marketing our industry as one that is interested in innovation.

“However, I am being told by horticulturalists that technology that could be used commercially, such as robotic strawberry pickers, is still around ten years off. In the interim we do need migrant workers for the agricultural sector.

"In addition, when the technology is available, farmers will need to be able to afford it.”

“One problem is that the machinery sector is a global sector now,” said Guy Smith. “I have a tractor that was manufactured in the UK, but it has parts that were built in Italy and France, so buying truly British machinery is difficult.

“With regard to British food products, we have lost 20 per cent of our home market in the last ten years. We used to be 90 per cent sufficient in indigenous food, we’re now only 70 per cent. I think part of the domestic agricultural policy should be to reconquer some of that market.”

“I spent time in Germany,” noted Alison. “And you just don’t find produce or machinery that isn’t German. I found out about the referendum while I was working out there and I got so much stick about our decision, saying how stupid and naïve we were. It made me feel like saying ‘Come on, we can do this. Let’s get together and make the most of our strengths in food production and in engineering’.”

“Alison, I think you are right to suggest that we should support British industry,” replied Harper Adams Vice-Chancellor Dr David Llewellyn. “And I believe we have an opportunity to reinvent a smarter technology sector for agriculture. That’s what we’re trying to promote at Harper Adams, not just on this campus, but also getting local decision-makers to think about investing in this field.”

The final topic for discussion was the need for more farming education in schools, raised by Jack Davies. He said: “Education is important. When I was at school I had no lessons about farming and one about where milk comes from. The kids didn’t know what a tractor was. I have friends who don’t know the difference between locally produced bacon and other bacon – to them it’s just bacon, because they’ve never had education about food production.”

“I couldn’t agree more,” responded Guy Smith. “The NFU has created packs to be sent to schools that teachers can use to educate children about farms through the prism of the whole curriculum – English, Maths and Science.” This approach was met with approval from around the table. Mr Smith then put the whole idea into perspective.

“But it’s also worth remembering that a number of industries believe they should be taught about in schools, and it’s a matter of perspective. I drive over a bridge and to me it’s just a bridge – I don’t think about the architecture behind it, and that’s the same view of someone outside of farming eating food. Sometimes we have to look in the mirror and consider if we are being hypercritical of the lack of understanding about out food systems.

“Why have we, as an industry, not done better at communicating with the public?” This was met by heads nodding in agreement from around the table. “We must harness the natural curiosity of children. An invitation for a farmer to take their tractor or cow down to a school for a day may appear to get in the way of work that needs doing on the farm, but it’s a very important activity that we should do more to engage with.”

Present at the discussion were: 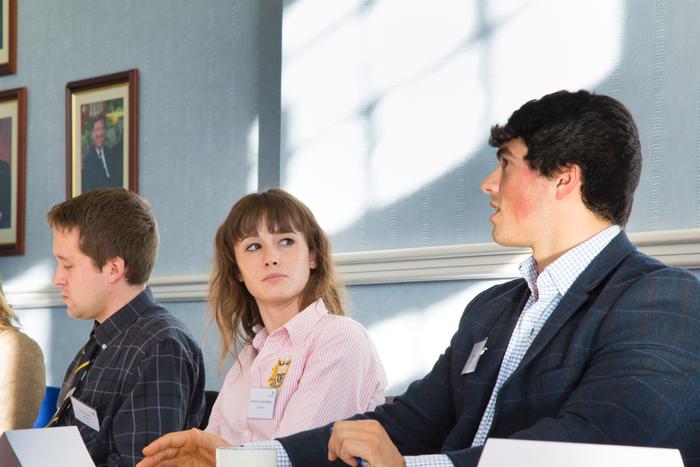 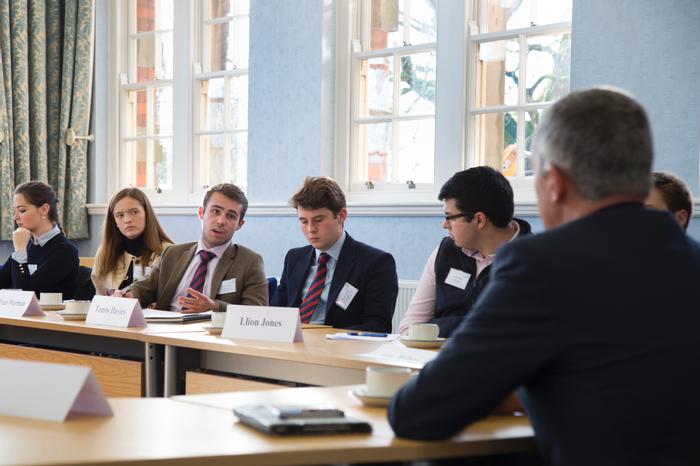