Each highlighted their strengths and depth of knowledge during the presentations but it was Richard who really shone and I was delighted to award him the trophy.” 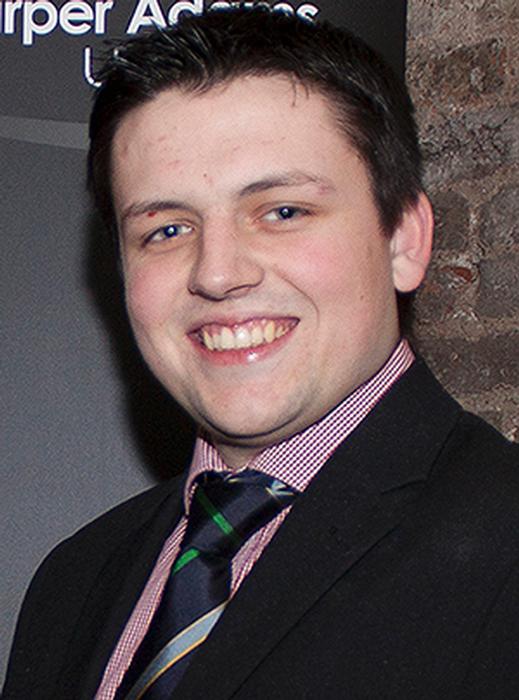 Richard Beattie, a final year BSc (Hons) Agriculture student, has been crowned 2017 RABDF Dairy Student of the Year - the third year running the award has gone to a Harper Adams student.

After beating four others in the final round of the competition at the Farmers Club, London, on Friday, Richard, from Ballymena, Northern Ireland, was presented with a £1,000 cash prize and trophy by competition sponsor, Mole Valley Farmers.

Students from eight colleges and universities across the UK entered to competition. Each institution was able to put forward up to three students, and all three Harper Adams students reached the final five. Attending the Farmers’ Club alongside Richard last week were Jessica Ravenhill-White, 23, a final year BSc (Hons) agriculture student from Umberleigh, Devon, and Patrick Armitage, 22, from York, final year BSc (Hons) Agriculture with Animal Science.

Each of the five finalists gave a presentation on ‘The UK Dairy Industry in the Next 10 Years’ before taking part in a debate with their peers where they faced tough questions on topics including AMR, the future of the industry, Brexit and dairy promotion while the judges made their decision.

Richard said, “I am really pleased to receive such a prestigious award. The competition was challenging but I enjoyed the whole process and it was great to be up against the best students from across the country.”

Richard plans to travel to New Zealand after graduation before returning to the family farm in Co Antrim where they average 9,500 litres from the 180 cow Holstein herd. Richard has plans to expand the herd to 300 cows while targeting a 25ppl cost of production.

Having spent his placement year as a trainee nutritionist, Richard said that time away from the farm gave him the opportunity to take a good look at the business and make new contacts within the industry.

Mike King, RABDF chairman said: “The standard was extremely high but Richard showed the most promise on the day with innovative ideas and well-rounded arguments. His essay was very strong and it’s clear that he has considerable potential.

“RABDF is committed to encouraging new entrants through our training courses and awards, and I can safely say our industry has a bright future based on the calibre of students we’ve seen this year,” he added.

Andrew Jackson, Mole Valley Farmers said the company was pleased to support such a prestigious competition and that he had been impressed by the high quality of all the finalists’ presentations.

“Each highlighted their strengths and depth of knowledge during the presentations but it was Richard who really shone and I was delighted to award him the trophy.”

With the competition in its 27th year, the format for 2017 was slightly changed, with agriculture and vet students invited to complete an essay based on a case study prepared by Kite Consulting. This featured a 300 dairy cow family unit, currently achieving marginal profitability and managed by a farmer seeking a long term plan to ensure the viability of the farm for his son when he retired.

The title was won by Harper Adams students (now graduates) Ed Towers in 2015 and Andrew Harrison in 2016.