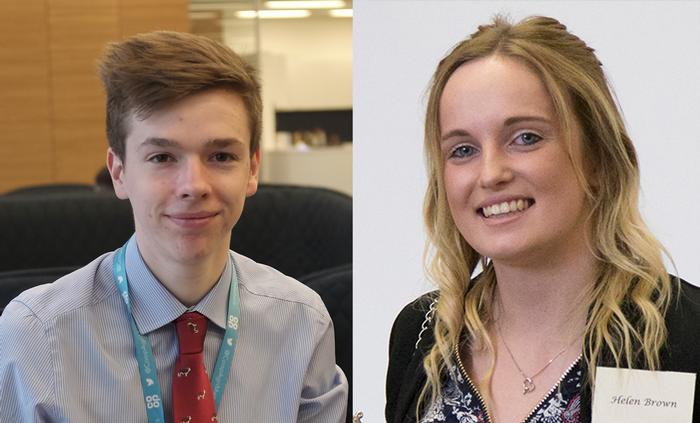 Two Harper Adams University students have reached the final three in the Farmers Weekly Agricultural Student of the Year competition.

Helen, a final year agriculture student, was nominated for the award by university lecturing staff. She recently won the Agrovista prize for the best placement performance by a BSc(Hons) Agriculture student and is a member of the 2017 Harper Adams Cereals Challenge team.

Helen said: "I'm over the moon to be shortlisted for this award, it feels great to have my efforts towards agriculture and my studies recognised in this way and am looking forward to representing Harper Adams."

Third-year student Josh was nominated for the award by his placement employer, Co-op Food, due to his performance during the sandwich year of his course, which he will complete this summer. Josh also runs his own Hereford Stud: Ghyll Beck Hereford Stud, marketing imported embryos and semen on line, which helps to fund his studies. In 2016 Josh also organised & hosted the very successful “Designer Genes Select Hereford Female Sale”, which is set to become an annual fixture.

Josh said: "It's a huge honour to get through to the final three for the FW Agricultural Student of the Year award and to be able to represent Harper Adams in the final. My time at Harper has certainly allowed me to expand my knowledge and experience, helping me to achieve a place in the final. This makes all the hard work worthwhile!"

Welcoming the news, agriculture courses manager Dr Russell Readman said: “We are extremely proud to have two Harper students in the final three for this national award. Helen and Josh are outstanding candidates for the award and a great example of the talent being nurtured here at Harper Adams.”

The Farmers Weekly Award winners will be revealed at a gala dinner in London in October.