“He is well informed, driven and gregarious – thanks in no small parts to his travels in the US, Canada and Uruguay over the years.” 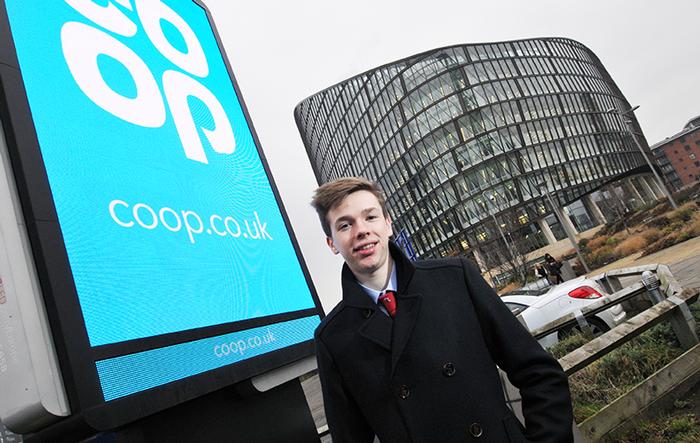 Josh Dowbiggin, 21, from Saleforth, Lancashire has been named the Farmers Weekly Agriculture Student of the Year.

He has recently completed his sandwich year with Co-op Food. He was nominated for the prestigious award by his employers after his excellent performance throughout placement.

Harriet Wilson, Harper Adams graduate and Josh’s manager at Co-op Food, said: “I’m so proud of Josh for winning the award and to have been his manager last year. Congratulations!’’

Josh won the award for his innovation and entrepreneurialism, excellent stockmanship and people skills along with his determination to learn from his mistakes.

From the age of 14, Josh knew he wanted to farm. His ambition of one day buying and farming his own land was encouraged by various trips abroad to farms, attending agricultural conferences as well as time spent on his grandparents’ farm, which is where Josh found a passion for Herefords.

Josh realised that a degree at Harper Adams would help him to achieve his goal and is currently studying a BSc (Hons) Agriculture. To fund his degree, Josh established a Hereford Stud, marketing imported embryos and semen online. In 2016 Josh also organised and hosted the very successful ‘Designer Genes Select Hereford’.

Josh has gained experience and knowledge of more of the supply chain with a focus on retail. Josh said: “I’d no idea of the work that goes on behind scenes in retail; I expected a reactive role, but it was very proactive, building contacts with farmers and farming communities.”

Writing about Josh, Farmers Weekly magazine said: “He is well informed, driven and gregarious – thanks in no small parts to his travels in the US, Canada and Uruguay over the years.”

Agriculture courses manager Dr Russell Readman said: “You’ll be seeing a lot more of this guy in terms of the breeding sector.”