"It is a tremendous achievement by our staff and students and reflects the leading role we have taken in the development of agri-technologies in recent years.” 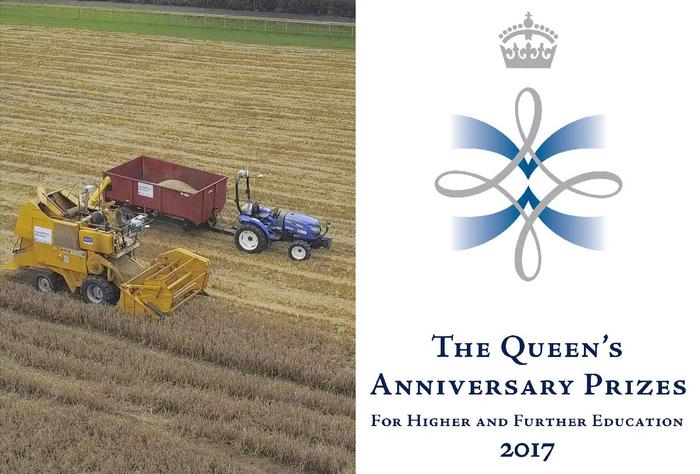 The Queen’s Anniversary Prizes are part of the honours system and are awarded every two years by The Queen on the Prime Minister’s advice. They are granted to the whole institution, irrespective of the area of work being recognised, rather than to an individual or department.

Twenty-one UK universities and colleges of further education were last night announced as prize recipients in the current - twelfth biennial - round of the scheme, during an event hosted at St James’s Palace by The Royal Anniversary Trust, attended by Harper Adams University Vice-Chancellor Dr David Llewellyn and Chairman Mike Lewis.

The Prizes will be formally presented at Buckingham Palace in February 2018 by a member of the Royal Family. As a national honour, the prize consists of a silver-gilt medallion and a Prize Certificate signed by HM The Queen.

This will be the second Queen’s Anniversary Prize received by Harper Adams, which was honoured in 2005 for its work developing women-owned businesses to support the rural economy. The latest award recognises the university’s pioneering work in developing agricultural technologies, and associated alternative farming methods, to deliver global food security.

The range of work for which the University is being honoured includes research into and development of controlled traffic farming (CTF) systems; support for the implementation of unmanned aerial systems and a world-first trial that proved crops could be grown autonomously, from seed to harvest.

Dr Llewellyn said: “It is a huge honour to be recognised with the Queen’s Anniversary Prize for Higher and Further Education. It is a tremendous achievement by our staff and students and reflects the leading role we have taken in the development of agri-technologies in recent years.”

Harper Adams University has demonstrated to numerous farming groups that CTF can be applied in the UK with potential benefits to crop production, soil health and water management. Work with Michelin on low pressure tyre systems, as part of a CTF system, has led them to invest further in products that support this farming approach and the university’s UK and international work on CTF techniques has enabled it research farming improvements in Sub-Saharan Africa, where there is an urgent need to address food security issues. This work has also been replicated in trials in the USA, at the University of Illinois.

The university has supported the implementation of agricultural Unmanned Aerial Systems (UAS), including the development of a code of conduct for agricultural drone use which has been adopted by BASIS, the independent standards setting and auditing organisation for the pesticide, fertiliser and allied agricultural industries, as the framework for its professional courses in this area. The university has also undertaken novel work with the RAF to determine how low flying aircraft and agricultural drones can operate safely in the same airspace, for which the RAF lead, Squadron Leader Gary James, was recently recognised with a prestigious flight safety award.

And key in 2017 was the creation of proof of concept for autonomous farming systems – with the Hands Free Hectare project successfully completing a world-first trial to grow a crop of barley on a hectare of land using agricultural robots and drones, and generating world-wide interest and debate in how autonomous systems could assist food production.

The Queen’s Anniversary Prize assessment process is overseen by the Awards Council of the Royal Anniversary Trust. Sir Damon Buffini, Chairman of the Trust said: “The focus of the Prizes on innovation and practical benefit to people and society is a great incentive to our universities and colleges to think critically about the direction of their work and its application and relevance in today’s world.  The national recognition and prestige conferred by the Prizes also enables individual institutions to win support and leverage funding for their future plans.”

Further information about the awards scheme and the Royal Anniversary Trust can be obtained at www.royalanniversarytrust.org.uk