“This is a fantastic result. I’m very proud of our students and the rest of the entomology teaching staff join me in wishing them well in their future careers.” 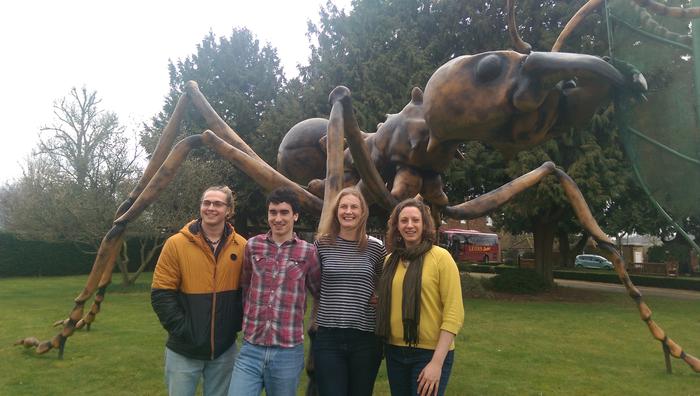 Harper Adams University has had its best results from the annual Royal Entomological Society Student Essay Awards ever, with students being awarded first and third place, along with both runners-up positions.

The four MSc Entomology students wrote about a variety of topics; from the annoyance of caterpillars in the garden, to the potential spread of the UK’s only scorpion breed.

James Fage, 23, from Walton-on-Thames, Surrey, was named as the competition’s overall winner with his essay explaining Müller’s mimicry hypothesis by showing how two different poisonous species of butterfly were sharing similar wing patterns. He explained how this helped predators learn to identify poisonous species, without too high a population loss to the prey’s species.

James said: "Mimicry has been a pet favourite topic of mine for a long time.

"Ever since I was lucky enough to have the chance to volunteer in the butterfly collections in the Natural History Museum in London during my teens, I've been fascinated by their vibrant and diverse wing patterns.

"Work on the Mocker Swallowtail Papilio dardanus, once described by British entomologist E.B Poulton as 'the most interesting butterfly in the world', was my first introduction to mimicry, and spurred me to read further on the topic.

"Müllerian mimicry (the mutual-resemblance club of some toxic species) in particular was something that stood out to me; while other forms of mimicry were so intuitive to grasp, Müllerian mimicry defied easy explanation."

"The sense of adventure I got from delving into dusty tomes written by 19th century naturalists during a happy few weeks of my undergrad, in order to answer deeper questions on the subject for a long essay, cemented it as an all-time favourite entomological topic for me.

On winning the competition, James added: "I'm pleasantly surprised, delighted, and honoured! The essay was a joy to write, and while I'd been cautiously optimistic, I'd gone into the contest knowing that I was far from the only entomology student out there with a passion for their own pet topic."

Maggie Gill, 37, from Ammanford, Carmarthenshire, shared her experience of exterminating a bee colony as a bee inspector in her essay entitled: ‘A sad day at the office’ which earned her third place. The bee colony had American fouldbrood. In her essay she wrote: “There’s no treatment for American foulbrood and as infected colonies are doomed to die from spore forming Paenibacillus larvae bacteria, they are destroyed and infected equipment is sterilised to prevent the spread of the disease to other colonies.”

On why she chose this topic, Maggie said: “I work for APHA as a bee inspector, so it seemed sensible to write about something I know. The majority of bee keepers are unaware of what bee inspectors do, let alone the general public, so this essay was a great opportunity to tell people about what I do.”

James was awarded £400 for first place while Maggie gets £200 for coming third. Both of the essays will appear in the society’s journal Antenna.

Runner-up Susan Hammond, 43, Bristol, Avon, wrote a humorous essay about being a keen gardener and watching her plants coming out eagerly each year and ensuring the strongest had access to nutrients and sunlight.

On creatures appearing in her garden, she wrote: “Initially, I celebrate that my small, urban garden can attract any wildlife at all. That changes though when I notice a proliferation of small holes in the leaves of my beloved broccoli.”

She said: “I wanted to write a piece which would draw attention to the world of insects which is going on right under our noses; sometimes in the most unexpected places. My essay was called 'Get of my Brassicas; one gardener's battle for broccoli'; and it's a story about how my attempts at vegetable growing are consistently hampered by caterpillars.

“But there’s an unlikely ally; a tiny parasitic wasp which is helping to keep the caterpillar numbers down. The twist in the tale is that the wasp is also parasitized; the parasite becomes the parasitised! And what's really incredible is that all of this is going on in my small suburban garden in Bristol.

“The inspiration came from seeing this happening in my garden last summer. I wanted to write something that a wide range of people could relate to and then have this incredible insect battle going on right at the centre of the story.

“The Royal Entomological Society is a historic and very highly regarded organisation so I feel really honoured to have been recognised in the competition and to have my work published in their bulletin.

“I've always been interested in wildlife and the natural world. The more I've looked into insects the more fascinated I've become; to the extent that I left my job of eight years to study them.”

The other runner-up, Sam Finnie, 23, from Birmingham, West Midlands, wrote about the only species of scorpions in the UK, and how it could potentially spread further into the country. Currently, the arachnids are hitching lifts across bridges, but have not yet not become established outside of Sheernes Dock, but rising temperatures could lead to it becoming established elsewhere in the country.

Within his article he shared some interesting facts, including that they can survive on as little as four meals a year and can even supercool, which means they can survive sub-zero temperatures.

He also provided reassurance in regards to the scorpion’s spread: “Not to worry though! These little scorpions may look scary, but they very rarely use their stingers and when they do, it’s said to be likened to that of a bee sting.”

Professor of Entomology Simon Leather said: “This is a fantastic result. I’m very proud of our students and the rest of the entomology teaching staff join me in wishing them well in their future careers.”