“I hope the launch of this new scholarship at the Harper Adams Field to Fork Festival on April 28, in front of some 9000 members of the public, will both encourage new students into the sector and also act as an inspiration to other alumni to give back – a shining example of Harper Spirit!” 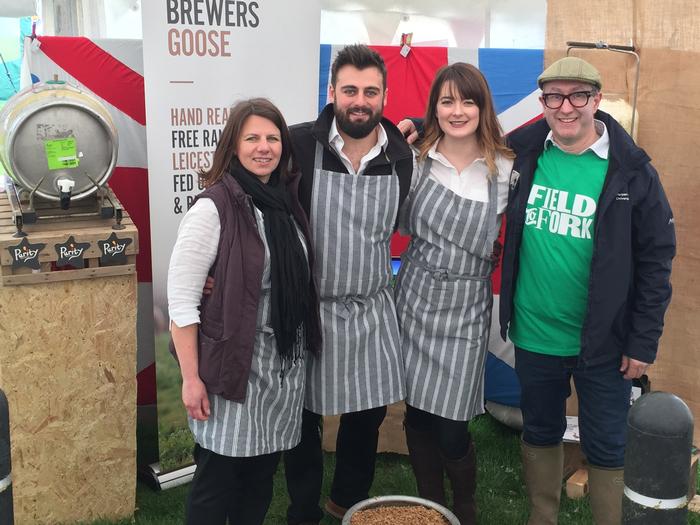 One of the biggest challenges that agriculture faces today is attracting new blood and new ideas into the sector.

Freddie Hammond, Harper Adams University alumnus and the Students’ Union President 2016/17, is addressing this issue head-on by launching his new business, the Brewers’ Goose, with a Harper Adams Development Trust scholarship of £1000, to help encourage new young entrepreneurs in agriculture and food industries.

“Young people’s access into the agri-food industry is still a huge issue which the industry needs to overcome,” said the 23-year-old. “I decided that even from small beginnings, my Brewers’ Goose venture can play its part in encouraging more young people into the sector.

“The Brewers’ Goose Scholarship will therefore be awarding £10 from every sale in the first year to a deserving Harper Adams graduate, who is wanting to take a similar path and start their very own business in the agri-food sector.”

Brewers’ Goose is a producer of free range geese, reared in the rural heartland of Leicestershire. Throughout the summer months, Freddie’s geese will be freely grazed upon a grassy hillside before being supplemented with fresh brewers’ grains in the late-summer and autumn months.

Freddie will be collecting the fresh brewers’ grains from local artisan breweries and stresses the intention to maintain and utilise local connections; reducing food miles and stimulating small and local economies.

Brewers’ grains, the bi-product from the brewing industry, provide a diet which is rich in protein and fibre, allowing the geese to fatten quickly and efficiently in the run-up to Christmas. As well as the beneficial nutritional value, Freddie adds: “I believe the sourcing of the brewers’ grains through local breweries is vital to creating a sustainable and renewable partnership between local food and drink businesses, which can work to everyone’s advantage.”

The idea for local food and beer collaborations began when Freddie recalled his grandfather, Robert Pick, collecting weekly trailer loads of fresh brewers’ grains from the local brewery in Syston, Leicestershire, which he fed to the dairy herd in the late-1990’s. As well as this, Freddie’s unrivalled passion for a pint of English ale was the catalyst for ideas of a local food and beer partnership.

Harper Adams Director of Marketing and Communications, Simon Pride, said: “I hope the launch of this new scholarship at the Harper Adams Field to Fork Festival on April 28, in front of some 9000 members of the public, will both encourage new students into the sector and also act as an inspiration to other alumni to give back – a shining example of Harper Spirit!”

Geese can be ordered now for Christmas from: fredhammond@icloud.com