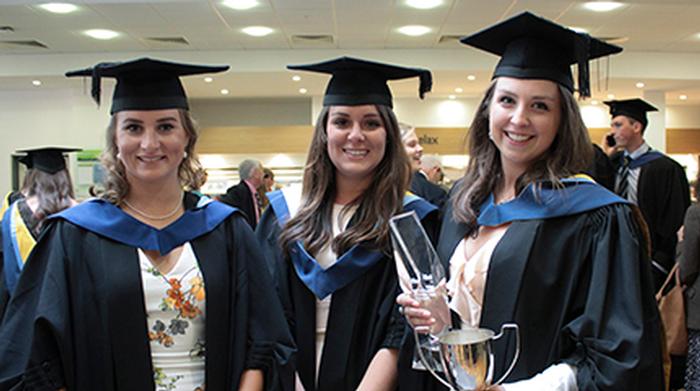 Booming opportunities in the UK food and drink sector are great news for Harper Adams University’s 2017 food degree graduates - 100 per cent of whom were employed six months after graduating.

Of those, 92 per cent moved directly into “graduate” level roles, with average food graduate starting salaries at an average of £22,000+ over the last three years.

Food sector growth also benefited Harper’s business graduates, who achieved an employment rate of 98 per cent, with 89.13 per cent in “graduate” roles with the average salary increasing to £21,746 for the 2017 leaver.

Careers Service Manager Maria Simpson said: “The number of jobs in the food and drink sector has risen. It now employs one in seven people in the UK. Our graduates have been able to seize the opportunities presented by this sector boom thanks to their studies and experience gained during sandwich placements making them highly employable as they complete their degrees. Providing talent for the food chain, from field to fork, is core to the university’s mission and the latest graduate employment figures prove that we are achieving against this standard.”

The figures come from the latest Destination of Leavers from Higher Education (DLHE 2016/17) survey, the results of which were published today. Harper Adams University as a whole achieved a graduate employment rate of 97.2 per cent, for full-time, first-degree students who graduated in September 2017.

Further good news from the DLHE outcomes included a second successive yearly increase in the overall average salary paid to Harper Adams graduates, up to £21,429 from £21,381 last year, and £20,764 the previous year.

It has been an outstanding year for graduates of the university’s Countryside, Environment and Wildlife programmes, who achieved 100 per cent employment , a modest salary rise and a huge leap in those moving directly into a graduate level role, from 48 per cent in 2015/2016 to almost 68 per cent for 2016/2017 leavers.

Land and property management graduates not only secured an employment rate of 97.10 per cent, but 88 per cent are in graduate level roles, and 88 per cent moved straight into the profession they had been studying for, becoming rural practice surveyors, graduate surveyors and land agents.

“One thing we measured when surveying our 2017 graduates was the high level of satisfaction within the roles graduates had secured. Even when an individual had taken on a position that might not be classed, for the purposes of the survey, as a “graduate” role, they felt satisfied with their achievement and what they are now doing six months post-graduation. The students’ own opinions of their job prospects through Harper matter to us and that has been highly recognised in national honours such as the Whatuni Student Choice Award for job prospects, which Harper Adams has won for three years running.”

For agriculture, the employment rate rose to 97.44 per cent and the average salary rose to £22,588, but there was a small dip in “graduate” level employment.

“This is not unexpected, particularly as many agriculture graduates choose to gain further experience, some of this will be abroad in Australia and New Zealand, working as farm assistants whilst traveling to gain experience before settling back into positions in the UK.

“The new Graduate Outcomes Survey, which is replacing DLHE, and will look at outcomes 15 months after graduation, will provide a much clearer picture of what our agricultural graduates do in the longer term, and it’s worth noting that the agriculture employment rate from Harper Adams graduates is ahead of the national average for the subject, 94.3 per cent,” Mrs Simpson added.

Animal Science graduates achieved a 90 per cent employment rate and an average salary increase of £20,000.

100 per cent of graduates from the joint degree programmes with Beijing University of Agriculture said their courses had prepared them well for further study. This is a very positive outcome with many progressing to a wide variety of postgraduate courses at their first university of choice.

Harper Adams University students and graduates are supported from day one of their studies to support a positive student outcome. All students complete a year in industry as part of their degree programme and there are good opportunities for students to return to this employer after graduating. The Careers Service organises a range of opportunities to meet employers throughout the year. More than 150 employers have visited and engaged with students on campus over the last 12 months. Careers support continues beyond graduation with alumni able to access the jobs portal, careers advice and further events to help them achieve their longer term goals.